New funding will be dedicated to boosting laser technology, bioinformatics research, and building a next-gen supercomputer 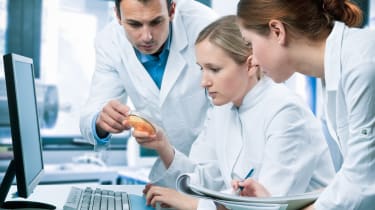 The chancellor Philip Hammond used the government's Spring Statement to put forward more than 200 million of support for research and development (R&D) in emerging technologies.

As part of the government's latest package of tech funding, 81 million will be committed to advancing the field of extreme photonics at a facility in Oxfordshire, while 45 million will be dedicated to bioinformatics research in Cambridge.

Meanwhile, 79 million will go towards funding a new supercomputer in Edinburgh, dubbed ARCHER2. It's touted to be five times faster than existing machines. The chancellor said the increased power - ten thousand trillion calculations per second - will support the discovery of new medicines, as well as further research in climate science and aerospace.

He also delivered an initial response to an independent review led by former Obama advisor Jason Furman into the state of competition within UK digital markets. The chancellor welcomed the report and instructed the Competition and Markets Authority (CMA) to conduct a market study of the digital advertising market as soon as possible.

"The UK will remain a great place to do digital business," he said before the House of Commons. "But it will be a place where successful global tech giants pay their fair share, where competition policy works in consumers' interests, and where the public are protected from online harms."

"There was some good news for the tech industry - namely, a commitment to make sure the UK is at the forefront of science and innovation through a substantial investment package," he said.

"What's more, the Chancellor has remained committed [to] ensuring the digital marketplace is not dominated by tech giants.

"But for now, given Westminster's fixation on Brexit over the last 12 months, it was at least positive to see a commitment to funding for innovation, free from the tired and cumbersome semantics of the Brexit debate we have been hearing on a daily basis."

Fountech.ai founder and CEO Nikolas Kairinos, meanwhile, welcomed the 200 million investment, suggesting this would instil some confidence in the market during turbulent political and economic times.

But the address was not well received by UKFast's CEO Lawrence Jones, however, who railed against the chancellor's measures at a time where he feels more urgent action is needed and accused Hammond of playing 'whack-a-mole'.

"I'm travelling back up north from London on the train, looking out at the homes and playgrounds, the communities out of the window whilst Hammond is delivering his statement.

"We need the government to be positive and focus on what's going to deliver befits for the whole country. How is a 79m supercomputer going to help someone living in a two-up, two-down?"

"We have been waiting for real change over AWS and the other tech giants taking advantage of Britain," he added, commenting on the independent panel examining the state of competition.

"How is a review going to make a difference? It looks like a delaying tactic. We need action now. It's an utter disgrace."