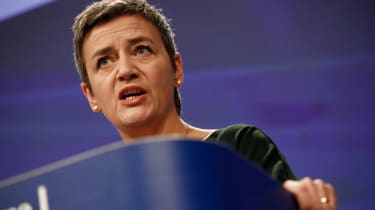 The European Competition Commissioner has issued a €1.49 billion fine to Google for restrictions within its AdSense platform.

Commissioner Margrethe Vestager announced the action during a press conference on Wednesday, which is the third financial penalty the regulator has placed on the tech giant.

"Today the commission has decided to fine Google €1.49 billion for breaking EU antitrust rules," she said. "Google has engaged in illegal practices when it comes to its search advertising programme in order to cement its dominant market position.

The third penalty revolves around advertising and specifically, Google's AdSense platform. When you type in a query into Google's search engine, you not only get the results, you also get ads that are based on the words that you typed in. This sort of advertising is one of Google's main sources of revenue.

However, the Commission has taken issue with Google's business of brokering advertising space on other sites where other websites like news outlets, blogs, or travel sites will all include a search box. These 'search' boxes allow the owners of those sites to make money in much the same way Google does on its own site by selling advertising space in the search results. These other sites rely on an advertising broker and the Commission believes that Google is by far the biggest of those brokers.

"This market is an important market because it's an entry point for competitors, including other search providers for online advertising platforms," Vestager said. "By gaining a foothold in advertising brokering they can then grow their business and try to challenge Google in the general search advertising business."

Challenging Google is some feat as its market share in Europe has been well above 70% since 2006. And there are high barriers to entry too, which makes it hard for competitors to come in.

The Commission said that despite that, competition should be possible in this market because different websites can use different brokers, and actually, the same website can use more than one broker to provide different ads.

"Today's decision is about how Google abused its dominance to stop websites using brokers other than the AdSense platform," she explained. "For the most important websites, which Google calls direct partners, Google provides brokering services, through tailored agreements.

"Our investigation looked at more than 200 of those agreements, and they all contained at least one type of restriction that harmed competition. These different types of restrictions often overlapped at different times."

The first type of clause is an exclusivity provision which Google began to include in its contracts from 2006. It meant that the most commercially important partners were prevented from sourcing search ads from Google's rivals from any of their websites.

The second type is called premium placement, which Google began including in its contracts from 2009, to replace the existing explicit exclusivity provisions. These clauses didn't completely stop direct partners from sourcing ads from Google's rivals, but the Commission said that they meant that direct partners would have to take a minimum amount of search ads from Google and put them in the most visible and profitable parts of the page. Meaning the best webpage space, where users were most likely to click, was still reserved for Google.

The third and final type of restriction, allowed Google to control how websites displayed the search ads of its rivals. Under this clause, website owners would have to get the written approval from Google before changing the way it displayed search ads of rivals. Right down to the size, the colour and even the font of those ads.

Vestager said that Google benefited from a network effect and became even stronger and that the fine reflected the serious and sustained nature of Google's behaviour.

On Tuesday the company finally addressed the anti-competition ruling for Android by announcing that existing Android phone users and future users will be offered a wide choice of browsers and search engines. Vestagar said it is was "welcome that Google is stepping up its effort".