At long last, Apple's arrogant behaviour has caught the attention of the EU 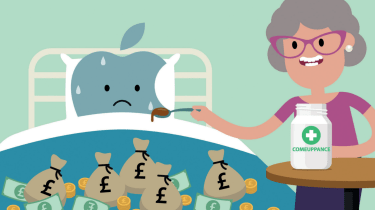 My nan was particularly keen on comeuppance. If you parked outside her house when she'd "put the bins out" to save a spot for her own car, or if you "played her up", you'd be admonished with the same phrase: "you'll get your comeuppance, you will".

Well, now it seems Apple is about to get a dose of nan's favourite punishment. After years of escaping the competition authorities' glare, Apple is reportedly set for a date with EU regulators to justify the massive cut it takes on certain purchases made through iOS apps.

For example, if someone downloads the free Spotify app from the App Store and then signs up for a 10-a-month Spotify subscription via that app, Apple keeps 3 of it. Not a 3 one-off commission, but 3 for every single month that subscription remains active. That's a nice little earner for doing next to nothing.

This has been going on for donkey's years, but it has come to a head now because Apple has since launched a highly successful music service of its own. In fact, Apple Music is primed to overtake Spotify as the world's biggest paid-for music subscription service in the next year or so. Apple, of course, doesn't pay a 30% cut to itself, meaning it has a huge competitive advantage over Spotify and the others.

While Apple effortlessly banks its profits, Spotify expects to make a loss of around 300m this year - and still get a barrel-load of grief from entitled pop stars who don't think Spotify is paying them enough (don't get me started on that topic). Spotify has "no other choice than to accept the 30% fee put in place," according to the company's CEO, Daniel Ek, "which essentially would mean we would have to raise our prices for consumers all over the world," he told the FT earlier this year. That got the EU's attention.

Why am I glad that Apple is finally getting its collar felt? Because it's been getting away with behaviour that others have been heavily punished for. Take Microsoft, for instance. It has paid billions of Euros in fines and been forced to jump through all kinds of hoops for bundling its Internet Explorer browser with Windows.

What does Apple do with iOS? Throws in the Safari browser and, even worse than Microsoft, forces customers to use it. You can't choose a new default browser in iOS, it has to be Safari. Even the Chrome, Firefox and other browser apps available for iOS aren't really alternative browsers - they're all forced to use the same browser engine as Safari, they just look a bit different.

Apple has so far gotten away with this because - laughably - it's not big enough. Despite fleetingly being the world's richest company, it doesn't have a monopoly-sized market share of the smartphone, tablet or computer markets, and so isn't flouting antitrust legislation. The very thing that makes Apple so much money - the high price of its products - has prevented it from gaining enough market share to get into hot water over competition law. Talk about the perfect cr... no, the lawyers won't let me use that word.

Apple's behaviour is vastly anti-competitive, not to mention arrogant. Its comeuppance has been a very long time coming.