“Nastiness, misogyny and hate speech” are pushing us towards a dystopian future, says Web founder 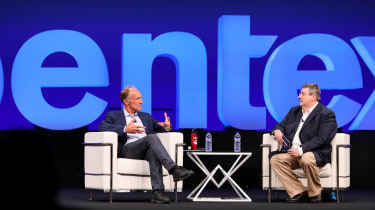 Berners-Lee, who was speaking at OpenText's Enterprise World event in Toronto, invented the web 30 years ago.

Comparing today with the early days of the web, he said: "It's not just we've lost all the value of the content; we've lost the spirit that everybody is creating this together, we need to we need to get that back.

"We have issues with nastiness, with misogyny, with hate speech and free speech, and the right to be able to say what you like, pushing against people's need to be respected on the web."

He continued: "If you need a sign of the Zeitgeist, measure the fact that Black Mirror is a thing. There is a TV series based on a completely different dysfunction of humanity."

Berners-Lee described social media platforms like Facebook as "well-intentioned, well-designed systems" but "after the analysis comes in, many, many years later, they realise that a social network does enable people to keep up with the family, but it also polarises people".

He said social networks must "do lots of analysis, [and] lots of measurement. It's really important for social networks to look at that data, and for all of us to hold them accountable".

Berners-Lee also said there was an increasing problem of 'fake news' and clickbait being rewarded by pay-outs from Google Ads.

"People are more likely to click on something which is not the truth. You see something which is not true, you have to go take a look to figure out what's going on because you may have to adjust your worldview," he said, citing a group of young people in Macedonia creating clickbait for profit during the 2016 US presidential election.

"It was Google training kids to lie. These are the things which we didn't think of in 1989," he said.

Berners-Lee admitted there's no easy fix to problems of privacy violations, scams and hate speech on the internet.

"If you're a social network you should try to develop what brings out the best in humanity, instead of amplifying the worst in humanity."

Berners-Lee pointed to the World Wide Web Foundation, which he established in 2009. "We like people to use the Web in a good way. Be creative. Be collaborative. Don't be nasty, that's simple. Build communities the respect on the web, that respects civil rights and human dignity, respect everybody."

He also said as a society we must fight for the Web when it's under threat. "The governments and industries will try to get policy and the technology right. But every now and again they slip up, they go in the wrong direction a country rolls back net neutrality, a company puts something in that discriminates against someone or charges too much for something fundamental. Then you have to go back to that closet where you have your poster taped to a broomstick and go out on the street, and you have to protest. Because at the end of the day, citizens are the only people who hold on either governments or companies accountable."

"We need people to start building White Mirror, we need to turn things around, and we need to start doing in a positive direction, putting energy into getting people together, we need to go back up towards the personal empowerment we got when we were bloggers."