Tech firms are not are aware of guidance, nor government support, as opposition against no-deal mounts 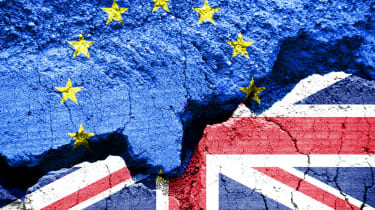 Less than half of small technology businesses consider themselves to be ready to face a no-deal Brexit on 31 October, with an economic slowdown and difficulties hiring staff chief among their concerns.

Larger businesses generally consider themselves to be much better prepared for an abrupt exit from the EU, with 87% reporting they're fairly or very prepared, according to research from techUK.

This contrasts wildly with the state of Britain's small businesses, of which 43% deem themselves to be ready, as do 50% of medium-sized companies.

As for general confidence, 71% of techUK members responded to questions suggesting no-deal will have a negative impact on their businesses. This is a slight rise against 69% when they were previously asked in December 2018.

"Being unable to predict the implication of no-deal is the most frequently cited reason amongst those taking no active steps to prepare," Vinous Ali, techUK associate director for policy told IT Pro.

Although 68% of enterprises reported they were aware of guidance issued by government, only 30% of small businesses and 33% of medium-sized businesses felt they were up to date.

TechUK was unable to specify what actions businesses have been taking to prepare for a no-deal Brexit, however, it said that "anecdotally we know there are various things members have been doing to prepare whether that be stockpiling products and parts or updating contracts; inserting standard contractual clauses to guarantee continued free data flow".

The main concerns facing businesses in the event of no deal include the overall impact on the economy, as well as the confusion and uncertainty over various elements of regulatory compliance. Businesses are also anxious over the difficulty in finding staff once freedom of movement ends, and additional regulatory barriers established that hinder trade.

The free flow of personal data, meanwhile, is another key concern for businesses, especially considering the fact that data arrangements post-Brexit have not yet been ascertained.

The readiness of certain businesses also varies depending on the nature of their work. For instance, organisations that do not rely on data transfers, nor trade beyond the UK border, may not require extensive preparations. Businesses that rely heavily on supply chains, meanwhile, are likely to face far greater disruption.

The Information Commissioner's Office (ICO) reissued further guidance yesterday in light of the developing political situation and likeliness of a no-deal Brexit, urging smaller businesses to prepare for every eventuality.

The data regulator still advises businesses to adopt standard contractual clauses where possible, but the validity of this mechanism is currently being considered by the European Court of Justice (ECJ). If SCCs are ruled universally invalid, businesses could be left without a legal means to receive data from the EU.