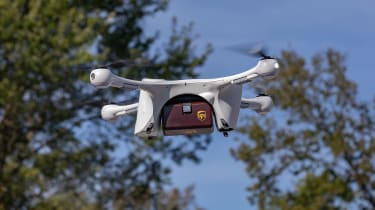 Delivery drones are taking to the sky in the US after UPS won regulatory approval for flights beyond the line of sight thought that doesn't mean that online shopping will be heading skywards just yet.

Plenty of delivery drone companies have run test flights, but now those projects are starting to look to regulators for approval to start full operations. Alphabet, Amazon and Uber are all working on drone delivery, with competition from existing delivery firms such as FedEx and UPS.

UPS' Flight Forward subsidiary said it was the first to be granted a full Part 135 Standard certification from the Federal Aviation Authority (FAA); earlier this year, Alphabet's Wing Aviation won a more limited form of the certification, a Part 135 Single pilot carrier certificate that limits flights to a single named operator. That full certificate means UPS has no limits on the number of drones it can fly or the scope of its operations, the company said, meaning it can start to scale up its operations and built its business.

UPS is also now permitted to fly at night with a combined drone-and-cargo weight of 55 pounds (25kg). UPS drones can also be flown beyond visual line of sight, letting them travel longer distances and be controlled remotely.

Using Matternet's M2 quadcopter, UPS is offering the drone service to hospitals for delivery of medical products and test specimens, with its first flight at the WakeMed campus in Raleigh, North Carolina. The aim, UPS said, is to expand the service to support critical care applications.

"We will soon announce other steps to build out our infrastructure, expand services for healthcare customers and put drones to new uses in the future," said David Abney, UPS chief executive officer, in a statement.

That includes expanding the service to new hospitals, building a centralised operations centre and working with new manufacturers for different drone designs. UPS is also working on what it calls "detect and avoid" technologies for safer flights.

So far, the drone delivery is focused on healthcare applications, but UPS plans to offer services to other industries, in particular to transport regulated goods and special commodities, the delivery giant said. Wing is set to start a trial with Walgreens in the US later this year, while the FAA said it had six other Part 135 applications it was currently working on, suggesting more drone-delivery operators are set to hit the skies.