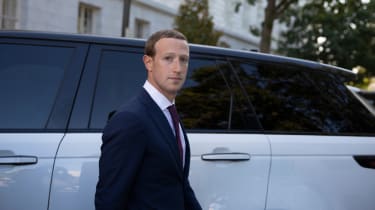 A hashtag for deleting Facebook has begun trending again after it was revealed that CEO Mark Zuckerberg had reportedly held informal meetings with conservative influencers.

It's believed that Zuckerberg hosted off the record meetings and dinners with conservative reporters, commentators and at least one Republican lawmaker to talk about issues like free speech and discuss partnerships.

It's the same hashtag that trended after the Cambridge Analytica scandal broke in 2018, where reportedly one in 20 UK users actually deleted their accounts. Despite the claims, however, Facebook still boasts some 2.7 billion users across its three services (Facebook, Instagram and WhatsApp).

The social network has been dogged by various troubles in the year and a half following Cambridge Analytica, from breaches of data to controversial plans such as Libra, its planned cryptocurrency, the company is permanently under scrutiny.

A lot of the pressure the firm is now under is coming from the US government, with President Trump suggesting it squashes conservative voices. According to reports, this is having an effect on the company and its CEO, Zuckerberg.

"The discussion in Silicon Valley is that Zuckerberg is very concerned about the Justice Department, under Bill Barr, bringing an enforcement action to break up the company," a cybersecurity researcher and former government official based in Silicon Valley said according to Politico. "So the fear is that Zuckerberg is trying to appease the Trump administration by not cracking down on right-wing propaganda."

According to one person familiar with the gatherings, which multiple Politico sources have confirmed: "I'm under no illusions that he's a conservative but I think he does care about some of our concerns."

Another party that sees Zuckerberg as a conservative is Democratic nominee Elizabeth Warren. Part of her campaign is hinged on the breakup of big tech companies such as Facebook and recently she ran ads on the website to show how easy it is run online ads without fact-checking.

"Facebook changed their ads policy to allow politicians to run ads with known lies explicitly turning the platform into a disinformation-for-profit machine. This week, we decided to see just how far it goes," she tweeted.

We intentionally made a Facebook ad with false claims and submitted it to Facebook’s ad platform to see if it’d be approved. It got approved quickly and the ad is now running on Facebook. Take a look: pic.twitter.com/7NQyThWHgO

Immediately after the Politico story broke, the hashtag for deleting Facebook began trending, with mostly Twitter users urging people to delete their accounts on behalf of democracy. However, as many businesses that use Facebook know, despite its constant struggle to do the right thing or breed trust, it's actual service is very good.

In terms of what has happened in the last two years, Zuckerberg meeting conservatives is not as big a scoop as it might seem and if users aren't going to delete their accounts after the Cambridge Analytica scandal, it's arguably unlikely they will for this.