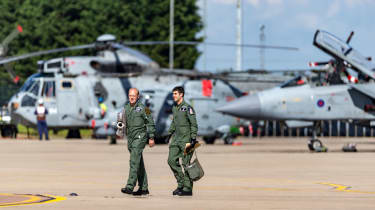 The NHS’ coronavirus app is currently being tested at a North Yorkshire Royal Air Force base, with the health secretary describing the trials as "going well".

The app, which is developed by the NHS’ digital innovation unit NHSX, is said to be using Bluetooth signals to monitor the distance between smartphone users and alerting users if they had come into contact with someone who may be infected.

The BBC reports that the current version of the app has two communications for users: "You're OK now," or "You need to isolate yourself and stay at home”.

Health secretary Matt Hancock told the House of Commons that the trials "are going well".

"The more people who sign up for this new app when it goes live, the better informed our response will be and the better we can therefore protect the NHS," he said.

However, the health secretary also emphasised that the app alone would not stop the spread of the coronavirus and it has to be supported by such measures as medical tests and manual contact tracing by humans, which are already, to an extent, being implemented.

Only last week, the NHS was ‘locked in standoff’ with Apple and Google over the app. The original plans set out by NHSX involved the creation of a centralised database of interactions so officials can harness a full view of the frequency of contacts, according to the Guardian. However, it has emerged that this fundamentally differs from the nature of the API being developed by Google and Apple, which is designed to work in a decentralised manner.

It is not clear whether the NHS’ app will be ready in time for when lockdown measures are partially lifted.

Earlier this week, it was reported that the Singaporean TraceTogether, which had been set as an example for the NHSX in developing their own app, has been downloaded by only about one in five people.