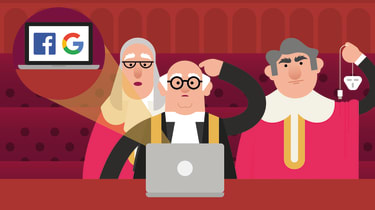 If there’s one thing that’s almost guaranteed to have me howling like a dog with its tail slammed in a car door, it’s politicians trying to get a handle on technology. The House of Lords Select Committee on Democracy and Digital Technologies is a panel formed predominantly of peers with little or no expertise in technology, chaired by Lord Puttnam – the film producer best known for Chariots of Fire. A great man, doubtless, but about as qualified to head up a digital technology committee as I am to direct the next Bond film.

Puttnam and co have spent the past two years “considering democracy and digital technologies” and have reached a set of conclusions that anyone faintly qualified could have told them at the outset. “The digital and social media landscape is dominated by two behemoths – Facebook and Google”. Well, hold the front page.

“They largely pass under the radar, operating outside the rules that govern electoral politics” – ah, you’ve noticed Mr Trump won the election, then? “Platforms like Facebook and Google seek to hide behind ‘black box’ algorithms which choose what content users are shown” – computers, innit?

However, if the committee’s conclusions win it the Basil Fawlty Lifetime Achievement Award for the Bleeding Obvious, then the recommendations are something to behold. Take the first one off the rack, for example, in which their Lordships recommend that “the relevant experts in the ASA, the Electoral Commission, Ofcom and the UK Statistics Authority should cooperate through a regulatory committee on political advertising”.

Wow. Talk about gathering the four paper tigers of the apocalypse. The ASA spends its entire, futile existence banning adverts that stopped running months ago, so slow is it to react to complaints. And long-term readers will know of my overwhelming scorn for Ofcom’s painful inability to regulate the broadband market, to the extent that we’re now almost rock bottom of the OECD league table for fibre-broadband adoption. The Electoral Commission, meanwhile, has achieved the rare feat of uniting both Leavers and Remainers in calls for it to be scrapped; at least the UK Statistics Authority could keep a detailed track of how ineffective the other three are. Asking these four to regulate something as fast-moving as social media is like asking Sir Bobby Charlton to man-mark Raheem Sterling.

Then there’s the recommendation that “the Government should establish an independent ombudsman for content moderation decisions to whom the public can appeal should they feel they have been let down by a platform’s decisions”. Got the hump that Facebook has removed a post about how irredeemably inept your local MP is? Then write to the independent ombudsman and wait nine months while yet another overworked, understaffed quango manages to get your complaint to the top of the in-tray, by which time the whole thing will have blown over.

With Bernie and Biden still slugging it out for the Democratic nomination, what impact will the US election have on tech?

The problem with appointing a panel of clueless peers to oversee new technology is that they will come up with 20th-century solutions to 21st-century problems. They’ve wasted two years on this nonsense and achieved nothing. I’m angry and you should be too – it’s your money they’ve wasted doing it