Falling costs and smaller kit are driving adoption of 3D printers. Soon businesses could buy them as readily as photocopiers. 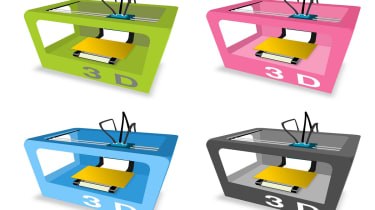 Inside the Enterprise: 3D printing is one of the fastest-growing, and fascinating, areas of IT hardware at the moment.

The first 3D printers or "additive manufacturing" machines started to find their way into manufacturers' workshops in the late 1990s. Although the machines were expensive and bulky, they give companies the ability to make full-scale, 3D models of new components, or even complete products, in-house, and directly from CADCAM software.

This was quicker, cleaner and cheaper than using a conventional modelmaker, and industry coined the phrase "rapid prototyping" for the process of CADCAM design and 3D printer output.

For now, the 3D printing market is really limited to manufacturing and product design, but it is expanding in to new areas, from healthcare to architecture. Sometimes, a physical model beats even the best 3D graphics for visualisation.

But over the last 15 years or so, 3D printers have both come down in price, and expanded their capabilities. The early 3D printers worked with a limited number of materials, usually a resin or plastic polymer, and were only really suitable for prototypes, and small ones at that.

Now, 3D printers can work with a much wider range of materials, including metals. And, although much attention is being paid to small and cheap 3D printers, and the growth of the "maker" movement of small-scale or craft manufacturers, the industrial applications are at least as important. Several F1 teams now use 3D printing both for half-scale wind-tunnel test models and full-sized components, and aircraft manufacturers such as Boeing are using them to make sophisticated parts.

This looks set to continue. Analyst firm Gartner predicts that 3D printer sales will grow by 49 per cent this year, and that shipments will double in 2015.

This is the market for "cheaper" 3D printers, costing less than $100,000. But perhaps the most interesting developments are at even lower prices: retailers are starting to stock sub-1000 printers, to appeal to both hobbyists and small businesses. Seven out of 50 retailers will stock the machines within two years, again according to Gartner.

And, although Gartner says that the fastest growing part of the market is 3D printers aimed at consumers, the really interesting developments are in the enterprise.

The computer graphics vendor Nvidia, for example, predicts a market where companies can develop complex 3D models in software, and have those rendered, and then 3D printed using a cloud service. Companies would then avoid the need to buy both the advanced computer equipment needed for 3D work, and the printers themselves.

But there is also strong demand for companies that want to have 3D printers in house, if not on each office corridor. For now, the 3D printing market is really limited to manufacturing and product design, but it is expanding in to new areas, from healthcare to architecture. Sometimes, a physical model beats even the best 3D graphics for visualisation.

And maybe in a few years' time, companies will follow the lead of the aeroplane makers and F1 teams, and keep a 3D printer in the basement to make spare parts for all manner of systems and equipment. It could beat waiting for the repair man.