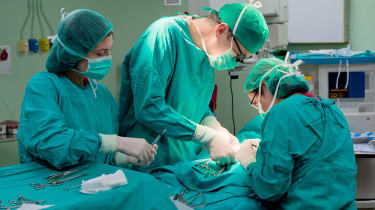 A 29-year-old motorbike crash victim has had his face reconstructed using 3D printing.

Steven Power was wearing a crash helmet at the time of the accident in 2012, but still received extensive injuries, including two broken cheek bones, a broken upper jaw, a broken nose and a fractured skull.

In what is thought to be the first procedure of its kind, doctors at Morriston Hospital in Swansea used 3D printing at every stage of the facial reconstruction.

Welsh doctors used 3D CT scans of Power's head to design a symmetrical prosthesis for the left side of his face from the un-damaged right side.

A state of the art facility in Belgium then printed a medical-grade titanium implant that has been used to rebuild his face.

While 3D printed implants have been used to correct congenital defects before, the operation on Power used custom made models, guides, plates and implants.

Maxillofacial surgeon Adrian Sugar, who was one of the team who carried out the procedure, told the BBC News 3D printing takes away the guesswork element from reconstructive work.

"I think it's incomparable - the results are in a different league from anything we've done before," he said.

"What this does is allows us to be much more precise. Everybody now is starting to think in this way - guesswork is not good enough," he added.

Power, who had been using a hat and glasses to reduce the appearance of his injuries, described the surgery as "life changing".

"I could see the difference straight away the day I woke up from the surgery," he said.