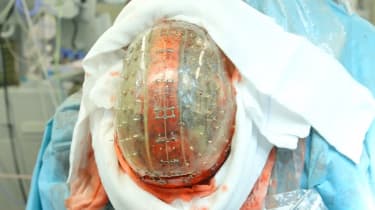 A 22-year-old woman suffering from a rare bone disease has received a lifesaving 3D-printed cranium replacement in what is believed to be the first operation of its kind in the world.

The anonymous patient suffers from a condition where the bone in the neocranium also known as the brainpan thickens, putting pressure on the brain. The condition progresses from the initial symptom of severe headaches to even graver health problems.

In the case of this particular patient, it had gradually caused her to lose her sight and had started to impair her motor coordination.

"It was only a matter of time before other essential brain functions would have been impaired and she would have died. So intensive surgery was inevitable," said neurologist Dr Bon Verweij, who led the 23-hour operation at the University Medical Centre Utrecht (UMC).

"But until now, there was no effective treatment for such patients," he explained.

This is not the first time 3D printing has been used to produce implants for cranial surgery, and Verweij has used this method before to treat patients who have had part of the skull removed to reduce pressure on the brain following an accident.

"We used to create an implant by hand in the operating theatre using a kind of cement, but those implants did not have a very good fit," he said.

3D printing allows surgeons to create an exact match for the patient, which, according to Verweij, looks better and has better outcomes in terms of brain function.

The replacement neocranium was provided by specialist 3D printing firm Anatomics, which is based in Australia, and has reportedly been very successful.

"It is now three months after the operation. The patient has fully regained her vision, she has no more complaints, she's gone back to work and there are almost no traces she had any surgery at all," said Verweij.

The UMC says this type of implant can be used on patients suffering from other conditions requiring surgery to the skull, such as those suffering from brain tumours or victims of serious accidents.

3D printing is being increasingly used in the field of medicine.

A British man had his face reconstructed using 3D printing following a motorbike accident, and another British surgeon used 3D printing to replace the pelvis of a man who had lost half of his own to a rare form of bone cancer.

Researchers in Belgium also used 3D printing to create a replacement jaw for an elderly woman who had suffered from osteomyelitis.