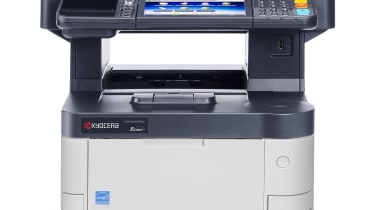 Kyocera's M3040idn is one of six new A4 mono laser multifunction peripherals (MFPs), aimed at workgroup applications. The new family is split into four models - two that print at 40 pages per minute (ppm) and two high-end models rated at 60ppm.

The two entry-level devices make do with conventional controls and a simple mono LCD, while the remaining four use a new 7in colour touchscreen. The M3040idn is the cheapest touchscreen model, rated at 40ppm. Although Kyocera quotes a daunting RRP of 3,300 ex VAT, it's widely available for less than a third of that price.

With the exception of colour printing, the M3040idn has almost everything that a workgroup might need. It has automatic duplex (double-sided) printing and a duplexing, 75-page automatic document feeder (ADF). This combination makes unattended double-sided photocopies feasible, although the ADF mechanically reverses paper, so it's not as fast as a dedicated document scanner with a sensor on each side of the page. For small offices needing fax support the otherwise-identical M3050idn might be a better choice, however it costs 200 more. 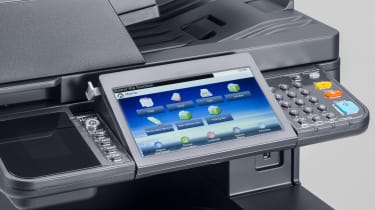 Aside from its impressive screen, features of the M3040idn include USB and gigabit Ethernet connections and a robust 15,000 pages per month 'maximum average' duty cycle - plenty for moderate workgroup demands. The standard paper handling comprises a 500-page paper cassette and 100-sheet multipurpose feed, but typically for Kyocera there's good scope for expansion.

There are two available storage cabinets, and you can fit a maximum of four additional 500-sheet trays to bring the total paper input to 2,600. While options include hard disk and memory upgrades and a data security kit, the standard 250-page output tray can't be expanded.

In common with other Kyocera devices, the printer's ceramic photoconductor drum isn't considered a consumable - rather, it's intended to last the life of the printer. Here it's guaranteed for three years or 300,000 pages, while the MFP itself has a two-year onsite warranty as standard.

The M3040idn ships with a 6,000-page toner, while the replacements are rated at a decent 14,500 pages, which ought to cut down on maintenance overheads. As we've come to expect from Kyocera, keen toner pricing gives the M3040idn class-leading running costs: printing an A4 page ought to cost less than 0.4pence (ex VAT).

This isn't an especially big or heavy MFP. While the box takes some shifting, unpacking and moving the device itself could in most cases be done by one person. Kyocera has improved its software setup since we last saw it, but there's still room for a bit more polish. The software warned that our newly installed test PC didn't have the prerequisite Microsoft .NET Framework 4.0, but didn't offer or give us the opportunity to install it. It's also necessary to manually configure the TWAIN scan driver after installing it - ideally this would be better included in the install process.

Some of the device's more advanced features are accessible through its touchscreen menu, but for full control there's a web interface, with sensitive settings protected by an administrator login. Although the touchscreen is clear and responsive and its menu system logical, operations requiring a lot of data entry - such as setting up address book entries - are probably best done through the web interface.

There's the usual range of network security options, plus device security features such as the ability to disable the USB host port or touch panel remotely.

By default, the M3040idn uses rather aggressive power saving, dropping into low energy mode after just one minute's inactivity, where it consumes just one watt. While the wake up time is fairly short, walk up users can only revive the device by pressing the illuminated Energy Saver button - pressing any key would be more intuitive. Oddly, using the web admin interface also wakes the device into its standby mode, where power consumption is 21 watts. We measured a peak of 729 watts while copying using the ADF.

This printer supports Apple's AirPrint standard, and there are apps to enable printing and scanning from iOS and Android devices, access to which can be controlled with a password. We tested the Android app, which was intuitive and straightforward, but although scans were successful our test prints failed; the printer produced a single error page.

This printer isn't too keen to get started, delivering a first page in 17 seconds from standby, or 35 seconds after an hour sitting idle. We measure print speeds from the moment the job is submitted to the point when the last page falls into the output tray, so it's common for printers to fall short of their rated speeds on shorter jobs. Even so, we were disappointed that the M3040idn managed only 23.1ppm on our 25-page text job, and just 16.6ppm on our more complex, 24-page graphics task.

Tested over 100 pages of text it reached a more acceptable 36.4ppm, but paper curled after printing, triggering the full bin sensor - we had to stay on hand to clear the bin and prevent the job pausing. It's likely the problem was caused by re-feeding previously printed paper - it didn't recur when we switched back to unused stock.

We've got no complaints about scan quality from this MFP; it's comfortably good enough for office and archiving purposes, with accurate exposure and no overt artefacts. Its print quality is more disappointing, however. In general, the toner seems less black than we'd expect, reducing the impact of text and the contrast available for reproducing images.

Photos and graphics don't show obvious half-toning patterns, but they have a somewhat mottled and soft finish that leaves them some way short of the best. We were also surprised to see some horizontal banding, not something we'd expect to be evident on a device in this class.

With underwhelming print speed and quality, this isn't the ideal MFP for everyone. That said, it's hard to argue with its practicality and exceptionally low running costs.