Brother's HL-L6300DWT is a no-nonsense mono laser printer, aimed at small businesses and workgroups who print in moderate volumes.

It's rated at 46 pages per minute (ppm) and a recommended 7,500 pages-per-month, which works out at roughly 350 sheets per working day. As the D, W and T respectively suggest, there's automatic duplexing, support for wireless networking, and an extra 520-sheet paper cassette. With two trays and a 50-sheet multipurpose feed, the standard capacity is a handy 1,090 pages. If one tray and a 570-sheet total is enough for your needs, you could buy the otherwise identical HL-6300DW for less than 300 (from Printerland at time of review).

Other specification highlights include a tiny 4.5cm colour touchscreen, NFC for easy pairing with mobile devices, and a Gigabit Ethernet port. The output tray is good for 250 pages, and there's a 10-sheet tray at the rear for the straight paper path. Disappointingly there's no USB host port for walk-up printing.

This is a printer that could grow with a small business: you can add a third 520-sheet tray for a 1,610-page input total, and expand its output handling with a 4x100 mailbox/sorter. There's no scope to add storage or expand the memory, but here the standard 256MB will more than suffice. 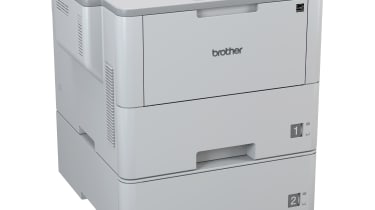 The less said about this printer's grey, boxy appearance the better, but it does get the details right: paper orientation is marked on each tray, for example, and this isn't obscured once the tray is loaded. The small touchscreen on the top panel relies on separate touch-sensitive controls for scrolling, but otherwise it's a useful and user-friendly interface.

The HL-L6300DWT feels built to take the abuse of a busy office: its various trays, flaps and paper guides seem strong enough to withstand printing, loading and generally being knocked around, so it's a shame that Brother only backs it up with a one-year standard warranty. Even with the extra tray it's not an especially big printer. Its fans aren't that loud and they stop quickly after each print job, so it's unlikely to prove overbearing even in a small office.

Timed from the moment the print job was sent, the HL-6300DWT delivered a first page of text in just 10 seconds from standby. After sitting idle for an hour the same test took 24 seconds - competitive, but off the pace of the fastest lasers and inkjets. The printer went on to deliver 25 pages of text in 41 seconds, a rate of 36.6ppm. Tested over 100 pages, where the time-to-first-page has less impact, it reached 44.1ppm, suggesting Brother's 46ppm claim is accurate.

Helped no doubt by its Gigabit Ethernet port and an 800MHz processor, the printer was impressive on our more complex graphical tests. Again including the initial spool time, it delivered 24 pages of business graphics, web and magazine pages at 29.4ppm. It was particularly fast at its maximum 1,200 dots per inch (dpi) quality setting, spitting out two 10x8" photos on A4 paper in just 11 seconds, and needing only 14 seconds to print six, 6x4" photos onto three sheets of A4.

We've no complaints at all about the quality of this printer's text, but its graphics were more of a mixed bag. Most were fine, with no obvious half-toning patterns and with well controlled shade progressions. Detail levels were impressive in lighter areas of our test photos, but darker graphics and photos exhibited some banding, and on the darkest of our four presentation slides the gradated shade transition in the background had become solid grey. That said, mono lasers rarely deliver great graphics, and we've seen much worse than this.

This printer's other weakness is slightly more significant: given that it's intended for moderately high volumes, it could be cheaper to run. Brother supplies it with a 50,000-page drum and an 8,000-page toner, after which the 'super high yield' replacement is good for 12,000 pages. At the best prices we could find, ongoing running costs work out at 0.95p per A4 page (ex VAT), which is just a little high.

The HL-L6300DWT has many strengths that make it well suited to a busy small business churning out lots of mono text. But while it's flexible and easy to use, its graphical prints could be better and it could be a touch cheaper to run. Overall, we narrowly prefer HP's LaserJet Enterprise M506x, which offers slightly lower running costs, but also slightly slower printing. Nonetheless, the HL-L6300DWT is a very capable alternative.

Brother HL-J6100DW review: An excellent choice - if you’re not in a hurry 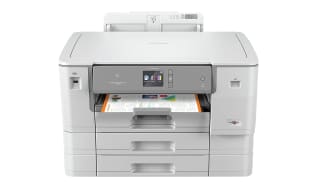 Brother HL-J6100DW review: An excellent choice - if you’re not in a hurry