Whatever happened to the paperless office?

Although its role has changed, paper still has an important function in the workplace 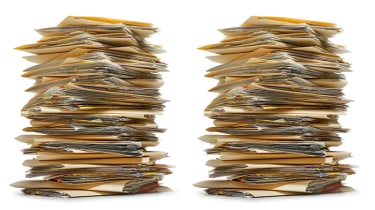 Over the last decade, we've seen many established technologies change radically. The packed underground trains that were once filled with workers burying their heads in paper novels and newspapers are now flled with workers burying their heads in smartphones, tablets and eBook readers. The idea that the workplace itself would one day be free of paper pre-dates the current digital trend, and was first predicted as far back as 1975 in a now-legendary article in Business Week. So why, nearly 40 years later, has this prediction failed to come true?

Back in the 1970s, the paperless office seemed like the natural endpoint of the computing technology that had begun to revolutionise production and accounting. The typewriter had dominated offices for over a century. Just as stock control systems and financial information have benefited from computerisation, the paper document that forms the basis of business in general looked like it could be replaced by electronic alternatives.

Xerox patented the fax machine in 1964. The telegraph had been in use since the mid-19th Century, and the telex was already available via the German Federal Post Office system in the 1930s. The telegraph enabled the rapid global stock exchange that drives the world economy today. However, paper was still a requirement at either end of these communication systems, and the positioning of the telegraph and telex stations was strategic. The New York Stock Exchange had a telegraph station closer than Boston's stock exchange, giving it a speed advantage in trading.

In contrast, email truly had the potential to take paper entirely out of the process. Email systems have been in existence since the 1960s, and their potential in business was recognised early on. The first email was sent over the ARPANET (the predecessor of the Internet) in 1971, and the original MIME specification for email was published in 1982. It was ten years later that the first MIME email attachment was sent, although this wasn't officially part of the specification until 1996. With the arrival of the email attachment, the potential to easily share documents electronically became a reality.

This went hand in hand with the adoption of standardised document formats. In particular, the dominance of Microsoft Office applications and the ubiquity of the Adobe PDF meant that not only did we have networking technology capable of sharing documents, but you could also be confident that the recipients would be able to read them, and update them locally if necessary. Online systems like Office 365 and Google Docs have further increased this ubiquity.

However, while it is evident to anyone who has been in the workplace for a few decades that the amount of paper in use has fallen considerably, it's also obvious that there are no signs of paper being banished from the office entirely. Paperless systems are founded on two key factors: the ready availability of generally expensive electronic devices for viewing documents in electronic form, and the ubiquity of networking to provide the connections for retrieving and sharing these documents. There is also the requirement that viewing devices impose on how much of a document you can view at once, with a set screen size through which documents must be displayed. You're unlikely to want to read an 80-page report on your smartphone. Paper, on the other hand, can be spread across a table, pinned all over a wall, and consumed in any environment with sufficient lighting.

A key consideration throughout has also been what kinds of record-keeping are required by law. The HMRC stipulates that tax records be maintained for a minimum of six years. These documents include till rolls, sales invoices, bank statements, paying-in slips, receipts, and so on. There are further requirements if you are an employer, and a legal firm will have its own needs to hold onto correspondence. You don't have to keep these on paper, but if they originated in this form it will usually be necessary to file these papers and also scan them for electronic storage. Many documents still require a handwritten signature for validation, making paper copies essential. Even if you do scan these documents, and apply optical character recognition so they can be readily searched, keeping hold of the original could actually be a legal necessity.

If your business attempts to move to a more paperless operation, you must be certain that any clients or customers will be able or willing to receive communications electronically. While you may be able equip your own organisation with the necessary devices, you won't want the expense of extending this to your customers. Courier firms, for example, will generally hand over a paper proof of collection, even though they will have just scanned an item into an electronic tracking system with a handheld device. Although utilities companies and banks have made a valiant effort to stop sending out paper statements, for many this has merely shifted the job of printing from the company to the customer; the end result is often still a filing cabinet full of paper records.

Electronic documents have changed the way we use paper, rather than eradicating it entirely. Where once the hard copy was the central document, now it's often more of a backup in case things go wrong with the digital version, or a convenient way of viewing a file received electronically. Document workflow is as important as ever; it's just a different workflow to the one used before. Electronic systems may have taken over for the transmission of documents, but paper is still highly likely to be preferable at either end of the communication process, so systems facilitating the input and output of paper documents are increasingly important.

We may have been using paper for thousands of years, but that hasn't meant it has been the same thing, or taken the same role, throughout this time. Paper has evolved from housing priceless religious texts to being the medium of scribbled shopping lists clipped to the refrigerator door. In the business context, the reduction in paper use is of obvious ecological necessity, although recycling can produce paper of the same grade as that which has been freshly produced, so this can still be an ecologically sound approach. But it's also clear that paper continues to have a place in the office, as a hard-copy backup, as a simple way of distributing information, or just because it is easier to read than a digital document on a screen.