HP is at the forefront of wireless communication with its printers, from SOHO, through SME right up to Enterprise-level MFPs. 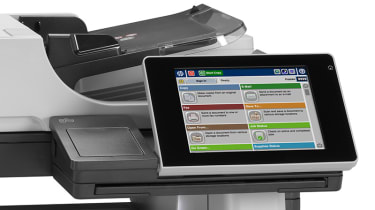 As wireless networking matures, more and more offices are considering wireless as opposed to cabled systems, because of their relative simplicity and low cost. HP has long included wireless provision in its consumer printer range and now even in its new enterprise devices, cable-less solutions are to the fore.

One of the first direct wireless connections was branded as an Apple product, but had been worked out in collaboration with HP from the start. When Apple decided not to include USB connection on its iPad and other iOS products, there was suddenly a need for a reliable and simple print connection for mobile devices.

When anyone sends a print job from an iPhone, iPad or iPod touch, AirPrint searches for compatible printers on any wireless networks in range and offers a list for the device owner to select from. Documents are built-up internally as PDF files and converted to PCL for printing. 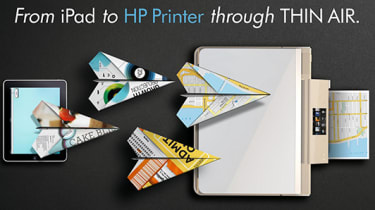 HP's best known wireless technology is ePrint, but this is actually a set of linked technologies under an umbrella term. The core idea is to be able to print to a specified printer, without the hassle of loading a printer driver and obtaining permission to connect to a network.

HP introduced ePrint in the middle of 2010 and promised to make it available to any printer in its portfolio, priced above $99. The company has gone on to introduce it to most devices from home inkjet all-in-ones to enterprise level laser multi-functions.

All ePrint devices make use of HP's ePrint Center, a web-based service, which allocates an individual email address to every registered ePrint device. Although allocated automatically, these addresses are designed to use a range of characters and numbers to provide strong security, though they can be renamed by printer owners, if needed.

Further protection is added by maintaining a list of permitted user addresses, the only ones from which print jobs are accepted. HP also applies spam filters to print streams coming through the ePrint Center.

As well as providing the simplicity of sending documents to a remote printer by simply emailing it, ePrint also enables documents to be printed from anywhere with an Internet connection and from just about any device. The ePrint Center can be contacted from Apps on Windows, Mac OS, iOS, Android and Blackberry, so you can send a document for printing from a smartphone, tablet or laptop. 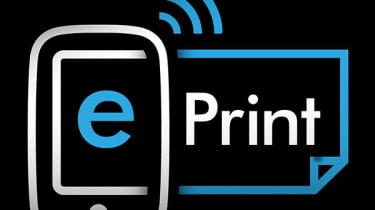 This is ideal if, for example, you're caught in traffic and late for a meeting. You can forward pertinent documents, so the meeting can start before you arrive.

ePrint can be extended by tying it in with Cloud storage, so documents can be held in the Cloud and called down for printing as needed. This way, the same document can easily be shared between employees who are working remotely or are mobile.

If ePrint is used in larger organisations, it may be more effective to maintain the equivalent of the ePrint Center within the company's own servers. ePrint Enterprise sets up this manager, together with an in-house storage area, where documents can be stored and printed from.

A key advantage of ePrint Enterprise is that all prints remain secure within the company's system and are under the jurisdiction of the company's IT management.

Another extension of ePrint is Wireless Direct printing, which is often more suitable when printing wirelessly to a local device.  Wireless Direct, as the name suggests, connects a computer or device directly with a printer supporting the protocol; it doesn't require a wireless network.

This kind of direct connection requires a supporting app on the device sending the print job and to have searched for and found the printe, using that app. Once the connection is made, the device should be able to connect again without having to re-search.

A Wireless Direct connection doesn't compromise network security, as it's an ad hoc connection between device and printer only, and doesn't require access to the company's infrastructure network.

It uses an application on the mobile device to discover available printers and handle serving of print jobs, the data stream is secured with 128-bit encryption, the connection can be password-protected and it doesn't breach a corporate firewall, because it's a one-to-one connection, even if the printer is networked.

Although Wireless Direct has made ad hoc connection of devices and printers much easier, there's still a need for one-off connections as when, for instance, a visitor to your office needs to print a document. Often, you don't want all the hassle of joining a network, with the security considerations that implies. 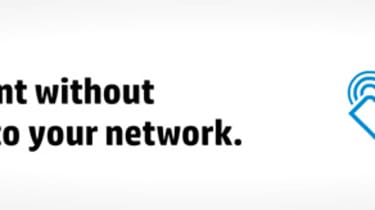 Near Field Communication (NFC) is designed to take care of this situation with the minimum of fuss. While not an HP technology, it's one which is being taken up by a number of mobile device and peripheral manufacturers to try and make it ubiquitous. HP is a strong supporter of the technology and has started to build it into some of its printers.

These include the LaserJet Enterprise flow MFP M880z, one of the first enterprise printers to offer the technology. NFC relies on near field radio technology, as used in Oyster cards and contactless credit and debit cards.

Touching an NFC-enabled device on the touch-to-print pad on HP printers equipped with it makes a temporary connection without the need for an app on the device. Since the connection is only between device and printer, there are no network security implications in allowing this kind of print.

Wireless connection is an increasingly important facility for business print and particularly with the growth of BYOD policies within companies, the twin needs for easy access to printed documents and security when doing so have to be addressed together. HP, which has long pioneered wireless connection to its printers, is in an excellent position to provide both.