The Evolution of Original HP Toner

The smallest component in a laser printer has had a massive impact on its development. 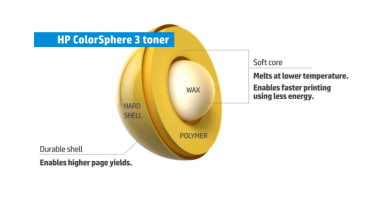 Laser printer technology has come a long way in the last thirty years, taking us all the way from the first HP LaserJet with its 300dpi, 8ppm print engine to today's 60ppm, 1200dpi HP LaserJet Enterprise models. Yet while print engines, toner cartridges and feed mechanisms have all improved, laser printers would never have come this far without the evolution of something tiny: toner particles. In fact, innovation in toner powder has been crucial every step of the way.

What does toner do?

Toner powder plays the role of producing the colour in the laser printing process. Tiny particles of the stuff are attracted to the latent image created by the laser on the imaging drum, then transferred to the paper where they're fused into place. In its simplest form, toner is nothing more than a blend of plastic resins, pigments and other ingredients that can melt at a relatively low temperature, transforming from a fine powder into a solid layer of colour, bonded with the fibres of the paper. In practice, of course, making toner involves complex chemical processes and years of research and development.

From Fine to Microfine

The origins of the laser printer lie in the office photocopier, where the earliest toner powders were fine particles that had to be poured into a reservoir hardly ideal with a substance that was impossible to clean, susceptible to dust explosion and harmful if breathed in, even though the actual formulation was non-toxic.

With the first HP LaserJet, however, HP used a dry toner formed from a mix of resins, pigments and additives, blended while hot to form a paste, then cooled and ground or pulverised into a powder. To maintain a consistent size, particles too small or too large were simply sifted out or re-ground. The challenge has always been to make those particles smaller and more consistent in size, enabling higher resolutions and more efficient print engines. Even by the arrival of the HP LaserJet 2 in 1989, the particles were on average 12-microns in diameter; fine for a 300dpi laser printer, but a problem once you wanted to go beyond that.

To reach the next level, HP needed to go finer, and three years later it announced the HP LaserJet 4 with a revolutionary Microfine toner powder. Microfine toner was smaller and more consistent in its shape and size, with particles of an average 8-microns in size. These smaller dots, packed closer together with HP's intelligent REt technology, enabled LaserJet resolutions to double to 600dpi.

In the autumn of 1997, HP made another advancement in monochrome printing by introducing UltraPrecise toner cartridges for the HP LaserJet 4000 series printers.  While there were a number of changes in the overall cartridge, the reformulated ultra-fine dual polymer toner powder produced smoother greyscales and finer details, while the smaller size enabled greater page yields than ever before.But HP's drive to innovate didn't stop there. Within 10 years HP introduced two new types of toner powder for monochrome devices. In 2007, HP introduced the first magnetic chemically produced toner for personal LaserJet printers, the P1005/1006.  This fundamental shift allowed for a reduction in the size of both the printer and the cartridge, while still pushing page yields even higher.  The small, uniform size and shape of the particles enabled efficient packing and transfer of the toner, while requiring less energy to print a page. In 2008, HP released a new low-melt black toner powder for the HP LaserJet 4014 and 4015 printers which supported print speeds of up to 62ppm.

In 1994 HP introduced its first CMYK colour laser printer, the HP Colour LaserJet. This used four cartridges of Cyan (C), Yellow (Y), Magenta (M), and Black (K). Like its monochrome predecessors it used a pulverized toner, but it wasn't long before HP's engineers started to wonder if there was a better way of producing even finer particles of a more consistent shape and size. By 1998, it had found one, incorporating a wax core and using a chemical process to grow' the C, M and Y particles to the exact size and shape required. The particles were smaller and spherical. They were more controllable and flowed better through the cartridge and the engine, improving page yields, resolution and performance.

By 2002, all the colour cartridges for HP Color LaserJet printers were being developed using this process. As a result, resolutions crept up further, to 1200dpi, while the gamut of colours that could be printed expanded. What's more, this new toner powder could have a more attractive and durable gloss finish, improving contrast and colour reproduction. HP followed this up with the first oil-less fixing system, creating a cleaner and more efficient print system for the Color LaserJet 4600 and 5500 printers.

The move to a chemical growth process paved the way for further innovations. In 2005 HP launched its first HP ColorSphere Toner; essentially a major revamp of the 2002 colour toner formulation. It comprised an encapsulated soft inner core of wax surrounded by resin, pigments and additives. HP ColorSphere Toner delivered glossier prints with a wider range of colours, improving skin tones, shadows and subtle gradations. The second generation of HP ColorSphere toner powder, in 2008, was even better, with more gloss and a 39 per cent wider range of colours than could have been achieved with pre-HP ColorSphere toners.

And now, in 2015, HP has launched a new line of HP Color LaserJet printers, driven by a new toner technology: HP ColorSphere 3. ColorSphere 3 wraps polymer layers around a soft core of wax, protected by a durable outer shell. The shell protects each particle while moving in the cartridge, preventing it from wearing over time to the point where it becomes unusable a problem so endemic to the laser printing process that manufacturers have to pack their cartridges with excess toner just to make up for the toner lost in action.

This advance enables printers using HP ColorSphere 3 toner powder to get up to 33 per cent more prints from a single cartridge. At the same time, HP ColorSphere 3's soft core melts at lower temperatures, requiring less heat and energy from the fuser to melt and bond to the paper. The result? HP's new Color LaserJet printers take less time to warm up and print the first page and consume less power, while taking up 40 per cent less physical space than their predecessors. Those toner particles might be very, very small, but get the formulation right and you can achieve great things.