Google tracks user data even when they go 'Incognito' 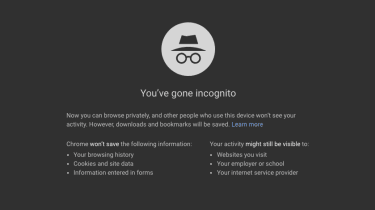 Google has been criticised for a policy that appears to allow the tracking of user data even when using Chrome's Incognito browsing mode.

Although the setting is meant for those users wishing to hide their activity, researchers recently discovered that Google could still monitor and record the sites a user visited, and then match that activity with their account information.

Incognito mode is advertised as a protected version of the Chrome browser that's meant to prevent site history from being collected, with content being supported by "anonymous cookies". When users switch to the mode, they're greeted with the message: "Now you can browse privately, and other people who use this device won't see your activity".

According to a study from Vanderbilt University in Nashville, Tennessee, if a user logs back into Google before they exit Incognito mode, the company is able to retroactively link their activity back to their account by using the anonymous cookies.

"While such data is collected with user-anonymous identifiers, Google has the ability to connect this collected information with a user's personal credentials stored in their Google Account," the researchers explained.

"Overall, even in the absence of user interaction with Google's most popular applications, a user of an Android phone and the Chrome browser still sends a significant amount of data to Google, the majority of which is associated with location and calls to ad server domains."

Douglas Schmidt, a professor of computer science and the author of the study, said that the scale of the data collection has until now "largely been overlooked".

"Google utilises the tremendous reach of its products to collect detailed information about people's online and real-world behaviours, which it then uses to target them with paid advertising."

He added that Google's revenues "increase significantly as the targeting technology and data are refined".

Google has since labelled the report "wildly misleading" and has denied claims it tracks user data in the mode.

Speaking to the Telegraph, a spokesperson for the company said: "This report is commissioned by a professional DC lobbyist group, and written by a witness for Oracle in their ongoing copyright litigation with Google", referring to an ongoing copyright dispute between the companies.

Google faces a separate legal challenge over allegations that it tracked millions of users through their smartphone activity, even after they switched off the OS' ability to share location history data.