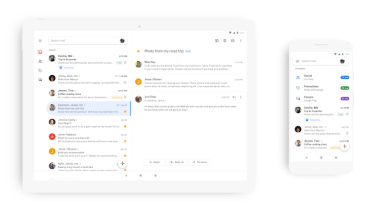 Google has announced it'll launch a fundamentally revamped version of Gmail for iOS and Android devices months after rolling out its redesign to users on desktop and web browsers.

A series of new features including nudges and smart replies', in-part powered by machine learning, will be introduced to mobile and tablet devices in the coming weeks as part of Google's wider push to rebrand its suite of productivity apps.

The firm's 'Google Material Theme', which debuted with the new Gmail in 2018, and subsequently in Drive, Calendar and Google Docs, will eventually be incorporated into all G Suite apps, the company announced in a blog post.

"Today, we're kicking off the year with a new look for Gmail on mobile, too. As part of the new design, you can quickly view attachments - like photos - without opening or scrolling through the conversation," said Gmail product manager Nikolus Ray.

"It's also easier to switch between personal and work accounts, so you can access all of your emails without breaking a sweat. And just like on the web, you'll get big, red warnings to alert you when something looks phish-y."

The tech giant issued a redesign of its flagship e-mail service last year to improve the user experience and deploy new technologies and features designed to ease inbox management. These included yellow nudges' prompting users to return or follow-up messages that are untouched for days, as well as high-priority notifications.

But Google isn't the only firm working on fundamental changes to its email service, with Mozilla announcing at the beginning of the year renewed efforts to improve its open source client Thunderbird.

Among the changes highlighted are a redesigned user interface (UI), better stability and smoother Gmail integration.

IT Pro approached Google for further comment and asked for a clearer timetable for the launch of redesigned mobile versions of the remainder of the G Suite.