The 'Your Phone' desktop app is getting call support, making it a serious rival to Apple's macOS iMessage and FaceTime 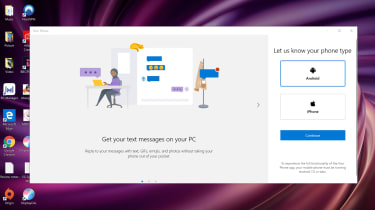 Windows' popular Your Phone desktop app is getting some more functionality upgrades, according to a new leak.

The user who leaked the new features on Twitter said he was able to make and receive calls using his PC's mic and speakers, with the added option to push the call back to the handset.

Your Phone is available to download from the Windows Store and it currently allows users to link up an Android phone and send texts from the desktop app, manage notifications and enable full screen sharing and remote control of the phone.

Your Phone app with Calls & dialer support, I can confirm it is working. pic.twitter.com/gpLU8ogXlw

As seen in the screenshots above, there is a dial pad with an option to make calls directly within the desktop app.

The 'Use Phone' button can be used to send a call back to the handset. This handy feature could be useful when discussing sensitive matters on call which started at a user's desk who later needs to move away from others to protect privacy.

IT Pro approached Microsoft for a confirmation of the feature's release but it didn't reply at the time of publication.

Microsoft has stated previously that it plans to roll out the feature this year however, it will likely go to the Windows Insiders for testing first before becoming generally available.

The app currently works well for those who work at computers and need to manage their phone-based correspondence without actually detracting them from their work.

From a productivity perspective, the app limits the number of times a worker has to break their focus away from their computer. Being able to manage all notifications on one screen is a useful feature that makes it a real competitor to Apple's iCloud integrations on macOS.

The added bonus Apple users have is that their iPhone doesn't have to be switched on to use these features as the communication methods are cloud-driven instead of ones requiring a SIM card.

Your Phone, like WhatsApp for web, requires a user's phone to be connected to the internet in order to send and receive data from it. It does have an advantage over Apple's iMessage though, as it can send messages and make calls to any mobile, not just those with iCloud accounts.

Although the two services have their own drawbacks, both offer comprehensive functionality for users wanting to manage their devices from one place. The new addition to Your Phone will surely be welcomed by those who aren't invested in the Apple ecosystem.