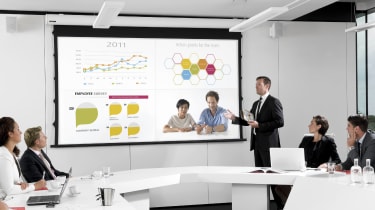 Meetings where multiple people need to contribute can be incredibly tedious, with each person having to either connect to the office projector individually or having to simply turn their laptop around to show other participants. It doesn't create a particularly collaborative atmosphere and normally leads to someone dashing out to find that Mini DisplayPort to VGA converter they left on their desk.

Barco's ClickShare products aim to change this by replacing the usual gaggle of adapter cables with a wireless connection that can be seamlessly shared between multiple computers. The CSC-1 is the top-of-the-range ClickShare device, with a price to match, so it has to be a totally seamless experience to justify the cost.

The CSC-1 takes the form of a base unit - a mini PC a little larger than a high-end router - and four buttons' - wireless dongles that you plug into your computers' USB ports. First-time setup is simpler than we could have expected, with everything working as expected with zero configuration.

This means the CSC-1 could easily be bought and set up by someone who has no technical knowledge whatsoever, and you could happily run the CSC-1 without ever having to reconfigure it. It's no wonder Barco doesn't ship the unit with a proper manual; it's simply not necessary for most buyers. With that said, there's a comprehensive and regularly updated user guide on Barco's website for those who want it.

Of course, there's a lot more to it if you're an IT manager who actually needs to integrate the CSC-1 into a corporate IT system. At the rear of the unit is a LAN port for connecting to your network. In order to configure how it behaves on your network, you have to connect to the CSC-1's local Wi-Fi network, navigate to its local IP address in your web browser and log in with the preset username and password.

everything working as expected with zero configuration

The web interface is much like that of a router, with simple, HTML-based buttons and boxes. The CSC-1 doesn't hook into any external devices natively: for example, if you wanted to hook the CSC-1 up to a video conferencing suite as a video source, you'd have to do this via a video splitter because the box itself doesn't handle it natively.

When you first run the CSC-1, there will probably be a firmware update available, but because it doesn't connect to the internet directly, you'll need to download the update to a PC and then upload the software to the CSC-1 via the browser-based interface. For us this was very simple and took around 10 minutes.

At the rear of the device there's a fairly conventional set of I/O ports that you'd find on a regular PC, including four USB ports (which will rarely be used), the Ethernet connector and two display outputs. Those outputs take the form of a DVI port and a DisplayPort connector. It's curious that more common outputs found on many projectors aren't present; VGA and HDMI would have been handy; you'll need to find adapters if your computers don't have DisplayPort or DVI outputs.

Both DisplayPort and DVI connectors can be used simultaneously with the CSC-1 outputting to two screens simultaneously. The CSC-1 also receives sound, and if you've connected your receiver via DisplayPort or have used a 3.5mm jack, you'll be able to play it on your display device.

Aside from the base unit and four buttons, the CSC-1 also ships with a nicely made tray' into which the buttons slot when not in use.

To project your screen to the CSC-1, you plug the button into a USB port. The Button is both a very small flash drive and a wireless transmitter, so when you plug it in it appears as an external drive for your PC or laptop. Simply open the application that's stored on the drive and you're ready to go. You'll see confirmation that you're now connected to the CSC-1, and that's it.

To project the contents of your screen to the CSC-1, you simply click the button. When you're projecting, the button is lit up red, and when you're not it's lit up in white. If more than one person is projecting at a time, the CSC will split the screen into two, three or four to accommodate them all. If you have two screens connected to the CSC-1, the third and fourth outputs will go on the second screen instead, unless you've configured the CSC-1 to clone to a second screen instead of extending.

Our only real issue with the way the multi-screen sharing is handled is that there's no way to force somebody to stop sharing their screen, meaning they might continue to share even when they have finished contributing. This means you'll have to press their button for them or ask them to stop. It would be a lot easier if someone was a meeting leader who can control who's sharing at any one time. It's a minor point, but something we reckon would make the whole process even more fluid.

The quality of projected content is excellent. There's a brief moment of fairly blurry content when you project for the first time, but after a couple of seconds you get a full-quality picture. There's next to no delay between the source and the CSC-1's output, which is great when you're watching video. There's a slight amount of judder on moving images, which is noticeable but completely acceptable for the office environment where videos will most likely be fairly mundane anyway.

We weren't able to get the signal to drop at any reasonable range; even standing 20 metres away with our laptop we still had a crystal clear image.

In addition to the buttons, which work on both Windows and OS X, you can also download the ClickShare Presenter app for iOS and Android. We had a lot of trouble with the Android app and it took a lot of fiddling to get it to connect. Once connected, the app isn't especially good and only lets you share things that are open in the app itself, and as soon as you navigate away from the app your connection is lost. It's not terrible - you can open files whether they are locally stored files or on cloud services such as Dropbox from within the app - but it's nowhere near as seamless as the Windows and Mac applications.

The Barco ClickShare CSC-1 is a terrific piece of kit that more than justifies its asking price for businesses who need a better way of handling projector-based meetings. With very few drawbacks - such as patchy mobile apps, a lack of third-party integration and a rather free-for-all way of managing meetings - it's a great buy.

The Barco ClickShare CSC-1 is an expensive way to streamline your meetings, but it’s absolutely worth it