The cables will connect Chile to Los Angeles, the US to Denmark and Ireland and Hong Kong to Guam

Google has announced it will be building three new subsea cables over the next few years to connect Chile to Los Angeles, the US to Denmark and Ireland and Hong Kong to Guam.

The additional cables build on Google's current commitment to the opening of five new cloud regions - Netherlands and Montreal, set to open within Q1 of 2018, and Los Angeles, Finland and Hong Kong later in the year - part of what's considered to be a $30 billion infrastructure investment.

The new cables will be known as Curie, Havfrue and the rather unimaginatively named Hong Kong-Guam Cable system. 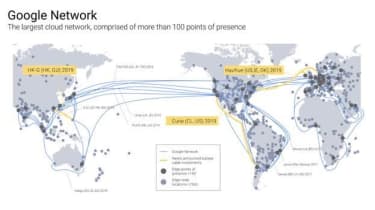 The Curie cable was named after Marie Curie and will place Google as the first non-telecom company to implement a private intercontinental network. It will also be the first cable to be installed in Chile for 20 years, becoming the largest single data pipe in the country and significantly optimising latency and availability for businesses in the region.

Google will work alongside Facebook, Aqua Comms, and Bulk Infrastructure on its Havfrue cable, while its Asian addition will be installed with support from Indigo and other existing subsea systems to offer better capacity to users in Australia and its new Hong Kong region.

"Together, these investments further improve our network - the world's largest - which by some accounts delivers 25% of worldwide internet traffic," said Ben Treynor, 24x7 VP of Google Cloud. "Companies like PayPal leverage our network and infrastructure to run their businesses effectively."

"Simply put, it wouldn't be possible to deliver products like Machine Learning Engine, Spanner, BigQuery and other Google Cloud Platform and G Suite services at the quality of service users expect without the Google network," he added.

He added that the new systems will "provide the speed, capacity and reliability Google is known for worldwide, and at Google Cloud, our customers are able to make use of the same network infrastructure that powers Google's own services".

The Curie, Havfrue and HK-G cable systems are expected to go live in 2019.