Microsoft rakes in $30.1bn thanks to strong cloud growth yet again 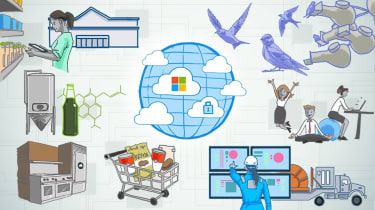 Microsoft has reported strong revenue results in its 2018 fourth quarter financial results, unsurprisingly thanks to growing its cloud sales.

The Redmond company raked in $30.1 billion in total revenue for the quarter, a 17% increase over the same quarter 12 months earlier, with the company netting more than $8 billion in profit.

A large part of that revenue hike was driven by the 23% growth Microsoft's cloud business enjoyed, bringing in $9.6 billion for the company.

"Our early investments in the intelligent cloud and intelligent edge are paying off, and we will continue to expand our reach in large and growing markets with differentiated innovation," said Microsoft chief executive Satya Nadella.

Redmond boasted customers such as Marks & Spencer, General Electric, Starbucks and Telefonica as users of its cloud services, helping fuel its growth.

And that growth is likely set to continue as Microsoft also revealed a strategic partnership with Walmart, which will see the US retail giant make use of Microsoft Azure and the Microsoft 365 suite across its entire enterprise.

With a plethora of large businesses adopting digital transformation doctrines, whereby they shift from legacy IT systems to cloud-based services and make deeper use of digital systems and data, and Microsoft offering the second largest cloud platform in the world, it is no surprise that cloud is driving Redmond's business success.

That being said other areas of Microsoft are also enjoying growth, notably its More Personal Computing arm, which includes the Surface and Xbox hardware and services, that grew by 17% to haul in $10.8 billion.

Refreshed models of the Surface Pro line up and the release of the Surface Go are likely to help keep the More Personal Computing arm ticking along in hardware revenue, especially now that PC sales seem to be growing again for the first time in six years.

Microsoft closed out its entire fiscal year with a record-breaking $110 billion in total revenue, a 14% rise on the year before and an indicator that Microsoft is in rude health.