Google Cloud Next: A cloud for everybody?

CEO Diane Green: The cloud is a major vehicle for digital transformation 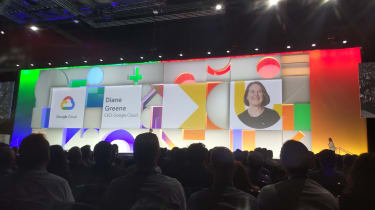 Cloud computing is "for everyone", Google Cloud CEO Diane Green said at the company's Next event at London's ExCel on Wednesday, but not everyone knows it.

Highlighting this point, the CEO told an anecdote from the night before. Green met a man, whose company is using Google Cloud to migrate their IT systems, but also didn't seem to realise who she was.

"My favourite interaction was last night, I was checking into my hotel and someone, I hope is in the audience, asked me if I was here to go to Google Cloud Next," she said with a wry smile. "I said yeah, I am."

It's a strange paradox to be the boss of a company delivering a game-changing technology for a business and yet that business has no idea who you are. Unlike its parent company, Google Search which celebrated its 20th anniversary recently, Google Cloud is only ten years old and, as yet, hasn't reached the same iconic status.

"It is interesting because we are early in the cloud," said Green. "Just 10% of workloads have moved to the cloud, but it is really clear that it is this major vehicle for digital transformation and that is where so much of our companies are going to digitally transform themselves."

This, Green said, was Google's new mission; to deliver its technology to millions of companies, any size, and take their data, organise it, manage it and make it useful and assessable to them in driving their business.

The company has laid a lot of groundwork, infrastructure and new services in Europe, particularly in London, where Green noted Google has been investing heavily in.

"Some of the investments we've made in the last 18-months include five new cloud regions in London, Germany, the Netherlands, Finland and we've also just announced one in Zurich," said Green.

"We have some of our best people here in Europe. We have DeepMind in London and they just announced another lab opening in Paris. Google Brain has a lab in Paris, Google Cloud AI has a large group in Munich, where we are doing applied AI and also some interesting robotics work and in Dublin, we have our Advanced Solutions Lab (ASL), where customers can come in and get deep immersive training in machine learning."

The range of digital transformations Google Cloud is offering can be seen in the diverse partnerships it has forged with companies such as AirAsia or transport services such as Airbus and German software company SAP, who Green said was a big partner.

Perhaps most unusual, is the company's partnership with the Zoological Society London (ZSL) which is using Google Cloud image API's to provide surveillance over wildlife to help with conservation. This nod to the environment is also seen in the company's regional data centres that Green said made Google Cloud Unique.

"Another differentiator that Google Cloud has, that is good for everybody in the world, Google Cloud runs all of its 17 plus region's data centres, carbon neutral," she said.