Box has launched what it describes as an "all-new" version of its Box Relay workflow management tool, featuring a more powerful workflow engine, a simplified UI, and improved tools for manipulating data.

The company first introduced the platform back in 2016 in a bid to make it easier for multiple departments, both inside and outside an organisation, to collaborate on projects from within the Box app, while automating much of the configuration side. It's designed to make repeated processes, such as the onboarding of a new employee to the company, easier to automate.

The platform has since received a number of updates and developments, including the launch of an API in July 2018, which allowed Relay to be integrated into other business systems, such as CRM and ERP tools.

The latest version now brings improvements to its core engine, which now builds workflows based on 'if this then that' (IFTTT) triggers to support processes that require a larger number of intricate steps. The platform will now also support the option to route content based on metadata attributes, for example, date, dropdown, multi-select and open text fields. 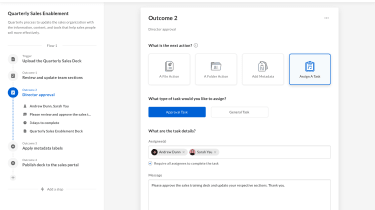 More immediately noticeable changes can be found in the updated visuals, including a new UI that's been redesigned to allow non-IT staff to build their own processes without the need for additional technical support. The main dashboard has also been given a fresh look, which will now display real-time metrics for workflow history, details on who created, updated or deleted workflows, and the option to export the audit history.

"Enterprise workflows built around content like document reviews and approvals and employee on-boarding and off-boarding need to be reimagined," said Jeetu Patel, chief product officer at Box. "They're disconnected from the apps teams use every day, locked behind IT, and don't support external collaboration."

"The new Box Relay brings powerful automation to improve these critical business processes, whether it's creating sales proposals and marketing assets, or driving budget sign-offs and contract renewals, and more. Enterprises now have one platform for secure content management, workflow, and collaboration that's built for how we work today." 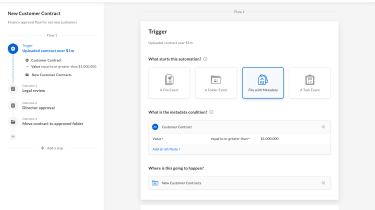 Relay has also been more tightly integrated into the Box portfolio. Specifically, users can call upon all the tools found in Box Cloud Content Management, including the security and compliance features, as well as the same integrations, such as Office 365 and DocuSign.

The new Box Relay is currently in private beta but will become generally available in "late June 2019". The platform will release with both a paid version and a free 'Lite' version.

Alongside the Relay update, Box said it is also working on a new single view UI as part of Box Tasks, which is designed to make it easier for users to see all their tasks at once, which will be supported with mobile push notifications. This addition is currently in public beta and will be added for all users for free once it launches generally.