Germany plans European IT boost after US spy scandal 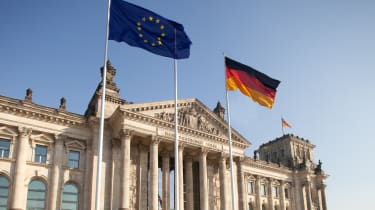 Chancellor Angela Merkel's cabinet agreed initial plans on Wednesday to boost European technology companies and make them a more favorable alternative to US peers, following unease over US surveillance of the Internet.

Merkel's chief of staff said on Monday that fears of mass US spying on Germans were unfounded, and Washington had assured Berlin it had upheld German law. But with an election looming in less than six weeks, the government has come under pressure to do more to protect citizens' private data.

First results would be discussed at a IT summit in Hamburg in December, he said.

A former US security contractor, Edward Snowden, set off an international furor when he told newspapers in June that the National Security Agency was mining the personal data of users of Google, Facebook, Skype and other US companies under a secret program codenamed Prism.

Snowden, facing espionage charges back home, has been granted a year's asylum in Russia.

The German cabinet also agreed to negotiate with the European Commission on tightening EU data protection laws, and to pursue a "no-spy deal" with Washington, whose details are as yet unspecified.

Merkel's conservatives are still tipped to win the September 22 federal election, with opinion poll ratings at 40 percent, some 17 points ahead of the opposition Social Democrats (SPD). It is less clear whether Merkel can renew her center-right coalition with the Free Democrats (FDP), who are polling just 5 percent.