Max Cooter explores the need for reliable, accessible and environmentally friendly data in the public sector 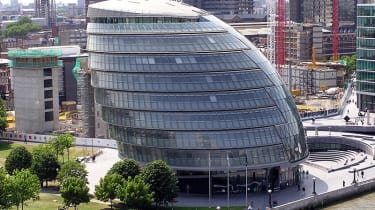 Cast your mind back forty years. It wasn't all about beige decor, hideous fashions and the three-day week the computer was beginning to become an indispensible part of business and computer scientists were mulling over the ways that the machines would transform commercial life.

One of the slogans that made its first appearance in that decade (in a 1974 edition of Business Week to be precise) was the paperless office.

It sounds like science fiction, in the same way that jet packs were deemed the travel of the future in the 50s. The advent of the paperless office has been just as chimerical the truth is, we're addicted to paper. And despite those messages appended to the bottom of emails, imploring us not to print the email out, it's an addiction that's hard to break. According to government figures, about 80.6 million tonnes of printing and writing paper is produced by UK offices every year that's 24 per cent of total UK waste.  And the public sector is one of the worst offenders when it comes to producing unnecessary paperwork.

That's despite the best endeavours by the coalition government to cut waste. There's a concerted drive to haul back public sector expenditure and the cost of paper purchasing and subsequent disposal makes up a significant part of that. It's true that there are some regulatory requirements faced by public sector there are thousands of individual records to be kept and they should be ready to provide information to their citizens.  So the task of cutting waste should not be underestimated: it's a delicate balancing act to keep costs low and, at the same time, provide the access that's needed.

There's certainly a challenge ahead. According to a 2009 survey, from the Centre for Economics and Business Research (CEBR) the public sector's productivity performance was costing taxpayers nearly 60 billion a year - half of the total raised in income tax. It was against this background that the coalition government came to power, declaring war on local authority waste and looking for ways to run councils more efficiently.

The advent of cloud has provided an ideal opportunity to meet this challenge, offering a way to be more cost-efficient. From the cutting of server costs, and removing IT departments from the strain of managing data centres as well as maintaining and patching hundreds of machine, cloud could be a transformational technology for the public sector, and especially local government.

One of the key ways that this can be achieved is moving to the cloud for backup it's becoming increasingly difficult to run effective on-premise backup, given the demands on compliance the public sector is very fond of its red tape - and given the way that the need to store data is growing at an ever-faster rate.  There's not only an overhead in running in-house backup devices, there's also the element in planning.

The option is to switch to a cloud-based model, something like HP Cloud Object Storage, which offers public sector CIOs the potential to go for pay-per-use, ensuring a more cost-efficient model. But it's not only this that has an effect, there's a lower administration cost too, by removing much of the planning and security overhead.

By using such a cloud-based system, councils could reduce data storage costs by as much as 80 per cent  and the volume itself would be less than an on-premise alternative, thanks to HP's de-duplication ability across sites.

But it's not just about back-up. There's an additional challenge facing local authorities, a challenge faced by many modern organisations: how to make best use of the data that has been gathered. These days, the challenge is conveniently pigeon-holed as a Big Data challenge, that catch-all marketing term for any dataset that's too large to be handled by your current IT set-up.

There's a twin challenge here: performing analytics on the datasets and ensuring that confidential data is kept secure.  A quick scan of newspaper headlines over the past few years would reveal a shocking litany of local authorities being cavalier with confidential data: it's something that greatly exercises the minds of council CIOs.

It's one thing having access to the council data but what the well-informed local authority wants to know is how citizens are commenting on council performance: where are the potholes? What's the parking like? Why hasn't my bin been collected? It is these interactions that will really help councils improve their services. But, of course, all of this needs to be gathered without revealing confidential data.

It's a delicate balancing act. HP's purchase of Autonomy has provided the company with the serious analytic chops to make sense of this mass of data and, at the same time provides a range of data protection products that work seamlessly with HP storage, offering the choice of public cloud or a hybrid cloud deployment.

Cloud isn't a panacea to all IT problems within the public sector or indeed, for all businesses.  There are issues on security and data compliance that need answering: there's the issue of some long term software contracts that still leave local authorities tied down and there are still some political concerns to be battled there's often a clash between the political masters and the council officers and that can lead to some inertia in driving transformations.

And we're certainly a long way from the vision of the paperless office that so enchanted those 1970s visionaries. We can safely say that paper is here for some time to come but there are some encouraging signs that our addiction could be broken. The need to store more data, the need to provide information more quickly and the drive to cut costs are spearheading a triple-pronged assault on the accumulation of paper records. Cloud has been the harbinger of many changes within the IT world, but this could be one of its most profound transformations yet.