Education: from the slate to the tablet

Education has changed immeasurably over the past 100 years. We chart how modern technology has revolutionised the way we learn 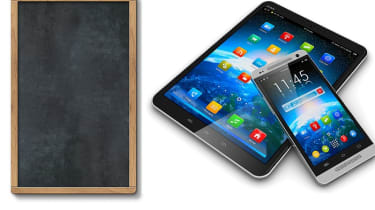 Imagine a typical classroom. What do you see? 25 children sat at desks facing the front, maybe? A teacher with a blackboard and chalk? If you're getting into real caricatures, you might also imagine the teacher in a mortarboard and gown.

Although the so-called digital natives may still be students at the moment, the oldest millenials who have grown up with technology all around them and expect to be able to use it in all aspects of their life are now 34.

It's no accident that this is still our idea of what a classroom is. In the 100 years following the Forster Act of 1870, which introduced compulsory schooling in England, not an enormous amount changed about the way we teach and learn. Indeed, the classroom still exists as a physical entity and the teacher stands at the front, sometimes wandering around, and is still there to pour out their knowledge to children in front of them.

However, from the 1980s onwards, technology has been reshaping the way we teach and learn. This change has never been so apparent as it is now, with mobile technology opening up new avenues of pedagogy.

The computing revolution in UK schools can be traced back to the use of BBC Micros in the 1980s.

While universities already had some computers, schools had by and large been without the technology.

Following an ITV documentary, the importance of computer literacy first became apparent to the wider public and the question of how to facilitate what would later be known as IT education became a matter of political debate.

From 1980-1986 the UK government ran the Microelectonics Education Programme, which saw BBC Micros introduced into first secondary and then primary schools, not just as ways of introducing children to the technology, but also as general teaching aids.