Is it time for voting to go digital? 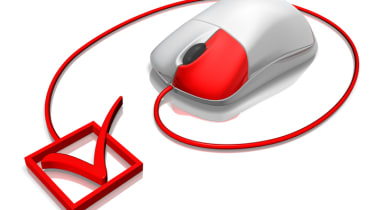 When you cast your vote in next week's General Election, it will be decidedly low tech: a pen to mark paper, which will be counted by hand.

Many think it's time for that to change, that voting should follow the shift to digital. That includes House of Commons speaker John Bercow, who led a report into digital democracy, calling for trials of online voting by 2020 - and perhaps allowing people to vote digitally in elections that year.

"Now I don't mean by that that it will necessarily at any stage be compulsory to vote in that way, but I think that the notion that, if it can be established as secure and reliable people should have the option to vote online, will gain ground more and more and more," he told the BBC in January.

There are many arguments in favour of online voting: advocacy group WebRoots Democracy claims it could boost turnout to 70% and cut ballot costs by a third.

Previous evoting trials didn't see such a leap, with turnout climbing by an average five points across five city councils testing the technology in 2002. However, in the past 13 years, people have become more accustomed to doing everything online, so the increase could prove more significant now.

Indeed, online voter registration appears to have helped boost signups. The day before the deadline, 470,000 people registered to vote online, versus 16,000 using the post to register that day.

Whether that would extend to casting votes remains speculation, but according to research by YouGov, commissioned by TecMark, 63% of people polled think the ability to vote via a mobile device would boost the number of ballots cast.

Despite that, only 41% of those asked said they support a shift to digital voting, with a third saying they oppose it and the remainder saying they were neutral on the subject.

The biggest concern, noted by 40% of respondents, was security, with people worried that the vote could be rigged or fixed if it was impossible to watch the counting process.

Indeed, security remains the biggest hurdle for online voting, with experts questioning whether it's possible to keep the system safe from hackers. And, because the required anonymity would mean you can't match a vote to a person, there'd be no real paper trail in cases when problems with the vote required a recount. The government would also need to come up with a way to verify identity.

Plus, online voting shares a flaw with postal ballots: it's impossible to see who is actually casting the vote remotely, and easy to imagine someone bullied into choosing a different candidate to the one they actually prefer.

Bercow and his commission said "the concerns about security must be overcome." As David Emm, researcher at Kaspersky Labs told The Mirror, "as people who are used to doing things online hit voting age, they're going to expect to be able to do it".

That said, it's worth considering some of the other recommendations for that digital democracy report, notably that by 2020 everyone should be able to understand exactly what it is that the House of Commons does - perhaps by politicians and civil servants using more clear language, for example.

If the Commission can figure out how to get politicians to speak in plain English, and successfully educate the rest of us on governance processes, than perhaps securing votes isn't impossible, either.