Russia's Silicon Valley: How Skolkovo aims to shake up startups 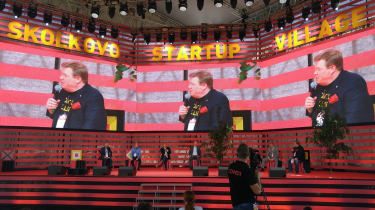 Russia wants to be the next major haven for tech companies and startups, aiming to expand its existing tech industry with the help of a 400-hectare innovation centre - with a whole town built to support it.

The Skolkovo Innovation Center is a high-tech development complex on the outskirts of Moscow; set up by the Russian government, the center is designed to foster the progress of startups.

The center is primarily the brainchild of Russian President Dmitri Medvedev, who announced its creation in 2009. Funded by the federal budget, Skolkovo's estimated budget currently sits at around $3.7 billion, with construction due for completion by 2020.

Despite such a large budget, however, much of the park still remains incomplete. Of the five planned districts, only one is fully built, while large swathes remain either under construction or yet to be started. Hold-ups in production could see the planned cost and completion date spiralling out of control.

The project is managed by the non-profit Skolkovo Foundation, which is co-chaired by ex-Intel CEO Craig Barrett and oligarch Viktor Vekselberg.

Skolkovo's efforts are divided into five clusters, each representing a different field that Russia feels it can improve in. The IT cluster is one of the most popular, and deals with a variety of issues including information security and cloud services. Also housed there are the energy efficiency, nuclear power, biomedical and space clusters.

There are around 100 startups already operating out of the partially-completed center, with about 1,100 companies confirmed for involvement at later stages. As well as startups, the Foundation has also secured the support of several key corporate partners such as Google, Cisco and Microsoft, who will have facilities on-site.

In order to promote the project and encourage growth in the industry, the foundation hosts an annual conference event, known as the Startup Village.

The Startup Village was envisioned as a way to energise the Russian startup community, providing insight into the process of creating and managing companies for both potential startups and investors. As well as expert panels, some of the centre's startups have the chance to pitch and exhibit their products.

The first day saw 14 agreements signed in total, up to a combined value of $272 million. These included various partnership deals, such as an agreement with Finland's Turku Science Park to create a 200 million biocity' and a deal with Panasonic to open an R&D center in the Skolkovo grounds.

While this remains an impressive achievement, it's worth noting that many of these deals have been in the works for months, and scheduled deliberately to coincide with the event. Russia companies are also lagging behind Asian rivals in terms of global brand visibility.

The center is set to bring an enormous amount of expansion to the Russian technology sector, with around 40,000 permanent residents and visitors. The government hopes that these developments will help Skolkovo become a rival to startup capitals like Silicon Valley and the UK's east London Tech City - a big challenge.

Becoming part of this ecosystem is not open to everyone, however. Companies must apply to become residents' of Skolkovo, but once approved by a board of experts, the participants receive numerous benefits.

Unlike traditional accelerator funds, Skolkovo residents receive a host of ancillary assistance, including tax cuts and relaxed immigration regulations for workers and researchers, in addition to seed capital and development grants.

So far, around one-fifth of Skolkovo's resident startups have received these grants, which total roughly five million rubles, or $150,000. However, in order to obtain these grants, the company must also prove that they are at least fifty per cent funded through independent venture capital firms.

As well as funding, the Foundation also provides guidance on marketing, promotion and intellectual property issues, all of which are key areas for new businesses, and ones which tech developers may not be familiar with.

One of the most remarkable things about Skolkovo is that it will essentially function as a self-contained independent city. In addition to communal lab and office spaces for startups and major partners, there will also be rental accommodation available for those who work in and around the park.

As well as full transport links via its own rail station, Skolkovo will have built-in amenities such as sports facilities, leisure areas and a number of parks. It will also have a full infrastructure system to support the residential family areas.

Skolkovo will have a university campus based on-site as part of a partnership with MIT. The Skolkovo Institute of Science and Technology, or SkolTech, will provide graduate-level education for 2,000 students in Skolkovo's main target fields.

The area is designed to be entirely self-sufficient, allowing the inhabitants to live, work and relax in the same space. One of the reasons for this is to foster collaboration between the startups and clusters, and this is already happening.

One autonomous vehicle startup needed some aerial mapping done as part of its development. Rather than engaging an outside source, they simply partnered with a drone company that was also operating out of Skolkovo, who provided mapping services for the cars.

Green initiatives are a large concern for Skolkovo. The center has committed to producing as little carbon emissions as possible, leveraging a number of eco-technologies. No internal combustion engines are allowed on-site, for instance; all travel must be via electric vehicles, bicycles or other environmentally sound methods.

Plasma incinerator technology will also be used in the destruction of the city's waste products. This technology is supposedly self-sustaining, and produces zero emissions, as well as resulting in slag, which can be commoditized and sold.

These commitments will almost certainly prove difficult to stand by as more of the area becomes inhabited, though. The adoption of electric cars is still slow compared to traditional models, and the environmental impact of around 40,000 people will be hard to negate. The power-intensive nature of the center's research and production will also be a considerable factor.

Although the park may prove invaluable for Russian startups looking to take an idea to market, the lure of Silicon Valley's prestigious reputation and established links to other vendors and companies could prove too big a challenge to overcome.

Russia may also find it hard to overcome the language barrier. Of the exhibitors at the Startup Village, many spoke little to no English. Russia's growing patriotism aside, English is still the main language of international business, and this may hamper the county's non-English-speaking startups.

Regardless of whether Russia will ever challenge the colossus that is the California tech industry - or even startup hubs in London or Berlin - Skolkovo could help catapult Russia onto the global tech stage.