Uber at the ECJ - will Europe share or shaft?

Europe's highest court is set to rule on whether Uber is offering an illegal service. What could the outcome mean for the sharing economy? 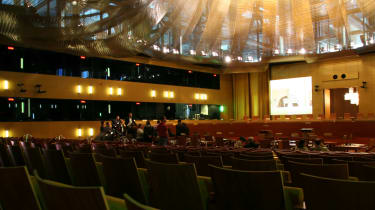 The so-called sharing economy hit a crunch point this week, with the European Court of Justice being asked to rule on whether Uber is a transport company or a digital service.

The ruling, when it is made, could have serious implications for Uber's business across the continent, where it has faced an increasingly hostile reception and a number of bans.

In France, for example, the company's two top execs were arrested in June on charges of illegally operating a taxi service and illegally handling data, and five Uber drivers have been charged in Bordeaux with illegally operating a taxi and/or being involved in illegal employment. Other EU member states, including Belgium, Italy, the Netherlands and Germany, have also banned the service, with Uber itself - as well as its drivers - facing fines reaching into hundreds of euros.

But a case in Spain, where the service is also currently banned, could turn all that on its head. Instead of ruling himself on the legal status of Uber, a judge in Barcelona has referred the case to the European Court of Justice, which has the ultimate say on the interpretation of EU laws across the bloc.

If the court rules that Uber is a transport company, then the bans will stand and, as The Financial Times points out, "could force fundamental changes to Uber's business model" by increasing operational costs, including how drivers are insured and adherence with the rules of local bodies relating to the private hire vehicles.

However, if, as the company hopes, the ECJ rules that Uber is a digital service, it will smash down barriers to entry not just for the ride-sharing firm, but for all companies involved in the so-called "sharing economy".

The sharing economy has been touted for some years now as the resolution to the problems of modern capitalism, particularly as jobs are increasingly becoming automated. As low skilled - and eventually, potentially, skilled - jobs become obsolete, for humans at least, the sharing economy suggests that we offer services to each other instead.

In its original form, this was a sharing of skills - a plumber would fix your sink in exchange for you building them a table or chauffering them somewhere.

Now, however, it has largely taken on the form of fee-based transactions, from ride sharing in the case of Uber, to renting out your house to holiday makers while you yourself are on holiday in the case of Airbnb, the other poster-child of the movement.

This new and seemingly final form of the sharing economy is, rather ironically given the name, the ultimate expression of libertarian capitalism. And, should the ECJ's dice fall in Uber's favour, it could radically change the face not just of European business, but even our culture as a whole. Laissez-faire individualism has not been our way, but it could be our futur. Either accept this new model or, so proponents say, face mass unemployment and civil unrest.

Investors are so convinced that this is the way forward that money is pouring into "sharing economy" businesses at an eye watering rate.

This is all well and good, but what happens to the people who power these businesses? Not the entrepreneurs, or even the customers, but those who offer their services for sale?

In a recent essay, economist Umair Haque described the sharing economy as "the servitude bubble".

"The stuff of the Servitude Bubble makes a small number of people something like neofeudal masters, lords with a corncucopia of on-demand just-in-time luxury services at their fingertips. But only by making a very large number of people glorified neo-servants...butlers, maids, chauffeurs, waiters, etcetera," Haque argued.

"The Servitude Bubble is creating 'jobs', sure - but only of the lowest kind: low-end, deskilled, dead-end, go-nowhere 'service' jobs... on balance, it deskills and impoverishes human potential - it doesn't expand and enrich it," he added.

The ECJ moves slowly, indeed a ruling isn't expected until autumn 2016, so it will be some time until we know whether or not Uber has got its way and see what effect it will have on the way business is conducted in the EU. But, however things pan out, the case of Uber will - undoubtedly - be a reference point for businesses, economists and law makers for decades to come.