A divided panel voiced their opinions on mandatory quotas, incentives, and transparency in STEM 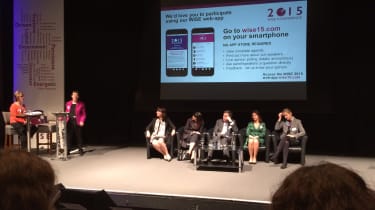 Leading industry figures came to London's WISE Conference 2015 this afternoon to discuss how to get more women into science, technology and engineering jobs, but were split over whether mandatory quotas would help their cause.

Shashi Watson, of investment management fund Winton Capital, said: "Absolutely not. It will only backfire. It's not quite time yet. There's going to be a stigma amongst those companies that would feel pressured, and the women that are employed there would feel like they're just being done a favour."

"I'm against quotas. I don't think we're ready for them," agreed Allan Cook CBE, chairman of design and engineering group Atkins, claiming they could set back progress made over the past 40 years. He also mentioned the pipeline problem, where not enough young women and teenage girls are learning STEM subjects, and recommended re-examining education.

Cook argued that positive changes have occurred and will continue, claiming the proportion of women in Atkins' graduate intake has risen five per cent year-on-year to hit 30 per cent.

However, Catherine Mayer, co-founder of the Women's Equality Party, expressed her impatience for greater diversity, and suggested using quotas as a short-term measure to speed up the process of getting more women into STEM jobs.

"The point is that there is a huge pool of talent that is not being properly accessed," she said. "Quotas are not a solution, they are a mechanism."

The idea of threatening legislation to encourage companies to take responsibility for their own diversity measures appealed to Mayer, rather than introducing mandatory quotas immediately.

Trudy Norris-Grey, WISE chairman, agreed but made it clear that if change does not happen, and soon, quotas may be necessary.

And president of the Institute of Engineering and Technology, Naomi Climer, added: "They're hugely unpopular, they're hugely divisive. I'd much rather not use quotas if possible. Though she did agree with Norris-Grey and Mayer that they may nevertheless be essential as a last resort."

The panel also agreed that developing and retaining talent is also a huge issue that needs to be addressed and monitored, particularly with the current gap in skilled workers, which the EU believes will hit 800,000 roles by 2020.

Meanwhile, companies that have acquire skilled workers must have the proper measures in place to keep them, especially with the prevalence of women not returning to the workforce after beginning a family, agreed the panel.

While the group was divided on mandatory quotas, it was much quicker to support incentives which would encourage, rather than force, change.

"I prefer incentives," Norris-Grey said. She posited introducing government contracts that require some sort of diversity target, as well as offers like tax rebates, training credits, and returning credits.

"Incentives in general are hard and costly to administer," she added, "but nonetheless that would be a natural preference to encourage both companies and women to take up incentives in order to come into jobs that we can't fill."

Mayer was likewise supportive of incentives, but warned that progress is not linear, as she once thought, and that advances do not necessarily hold.

She said: "One of the reasons that all of the things we're talking about have to be underpinned by other measures is that you can make great advances, but you can also see those advances erode if you don't do the things to support the women that come in."

With more and more companies voluntarily sharing statistics, the panel was asked to consider whether it was time to require public diversity information. They unanimously agreed that transparency should be compulsory and is a great way to stimulate more awareness about diversity.

Climer said that such a policy would be possible easily introduced, and not exceptionally controversial. As a means of generating greater awareness about diversity, she suggested making it mandatory for companies over a certain size to publish their diversity statistics around recruitment, retention, promotion, and pay.

Cook suggested that all companies, not just large ones, should be required to inform the public of their employee diversity.

Norris-Grey pointed out that in her experience, setting targets for diversity has created positive changes in behaviour.

"After 30 years in this industry, I'm unequivocal that we do need those targets, and not for fairness's sake although that's a good enough reason I would say but actually for business's sake," she said.

"Businesses that have a diverse workforce in all sort of ways are much more profitable, much more effective, and much more consumer-obsessed," she added.

She also proposed an initiative ensuring that one in three of the government's pledged three million apprenticeships go to women. Pointing to the five year plan introduced this summer, she felt that a measureable goal on this scale would make a difference for women in STEM roles and help to remove unconscious biases over time.

It's been 40 years since the Sex Discrimination Act was passed in the UK, but women make up only 14 per cent of the STEM workforce. WISE would like to see one million more women join the STEM field, raising the figure to 30 per cent.