Driverless ‘Heathrow pods’ to be tested on London streets

Production chain for driverless pods will be entirely British 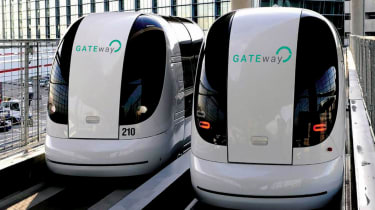 The first driverless vehicles are to be publicly tested on London streets this summer, thanks to a project to convert airport transport pods into automated shuttles.

The automated shuttles will take part in public trials for driverless vehicles, which are being held in Greenwich this summer.

The current pods have been in operation, running on tracks, at Heathrow's Terminal 5 for nearly five years. They have carried 1.5 million passengers and journeyed completed three million kilometres of fully automated operation. Powered by electricity, the pods have also reduced bus journeys numbers in surrounding roads by 70,000 a year, according to  Steve Chambers, Heathrow director of engineering and asset management.

The Greenwich shuttle trial, which takes place at Greenwich Peninsula, where the O2 Arena is based, will evaluate public acceptance of automated shuttle vehicles within the urban environment. It is one of three automated vehicle tests being run by the GATEway project. Other trials due to take place include autonomous valet parking and automated deliveries.

Julian Turner, CEO at Westfield Sportscars, whose firm is leading the conversion effort, said: "We're really pleased to be a part of the GATEway consortium.

"As well as a 100 per cent British supply chain, we can bring a number of benefits to the GATEway project, including knowledge of type approval processes and advanced pure electric race and road car technology that will not only ensure the shuttle trials are a success, but help put Greenwich and the UK at the forefront of automated mobility."

The 8 million project is jointly funded by government agency Innovate UK and industry. GATEway is a consortium, led by the UK's Transport Research Laboratory (TRL), and also includes the Royal Borough of Greenwich, the Royal College of Art and the University of Greenwich, as well as telecoms and energy firms.

Greenwich is one of four locations in the UK where driverless pods and public reaction to them are being trialled. Other tests are also being held in Bristol, Coventry and Milton Keynes.

The UK government green lit trials for driverless vehicles in February 2015, and expects to deliver a review of current legislation, based on its findings, by summer 2017.

Commenting last year on another driverless car project that's under development by the Centre for Connected and Autonomous Vehicles, transport minister Andrew Jones, said: "Driverless cars will bring great benefits to our society and economy and I want the UK to lead the way in developing this exciting technology."