Q&A: Dr Sue Black OBE on why the tech sector needs a step-change 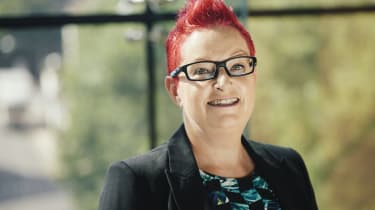 Dr Sue Black, the founder of techmums and honorary professor at University College London, has joined the government's new digital advisory group, which features a 50-50 split between men and women.

Black is one of seven women on the board, including Baroness Martha Lane-Fox and WeAreTheCity.com founder Vanessa Vallely. It will meet four times a year to support, advise and challenge the government to deliver better digital public services.

Here she speaks to IT Pro about her appointment, and, on International Women's Day, about how to get more women into the technology sector.

Congratulations on your appointment Sue, what made you decide to join the digital advisory group?

When I was asked to be on the board one of the first things I asked was who else are you inviting? I really wanted to know if I was the only woman or if there were going to be many women. I was absolutely delighted to see there were so many women on the board, it's great.

I'm sure we're going to be very successful and a 50-50 split board is a great idea. Everyone on there has great cyber expertise and it's a great mix of people, it's very exciting really. Hopefully that will really inspire other boards to think about having 50 per cent women.

What are the benefits of having a more diverse mix of people in top roles?

I've been in tech for 25 years now and I try hard to support and encourage women to go into technology or stay in technology, but also for everybody to realise the value that diversity brings to any organisation. If you've got 50 per cent women at the top that's quite unusual at the moment, but hopefully more and more organisations will realise that it actually that gives you strength. If you've got different types of mindsets coming to a problem you get a bigger pool of solutions to choose from.

As the founder of techmums, what do you think of all the schemes cropping up now focused on women in tech?

Unfortunately the percentage of women working in technology hasn't really changed [since I started], it's stayed around 15 or 20 per cent all the time I've been involved, which I could find depressing but actually there are lots of initiatives around already that have grown over the last 20 years targeting different groups and ages.

These range through from techmums to projects like STEMx and Code Club for Girls. There's lots of stuff with the Raspberry Pi, some of that focused on girls, and then lots of initiatives for women too. It's quite common now to see women's leadership groups in tech in big organisations and those didn't really exist 10 or 20 years ago. The general buzz on social media all around women in technology, that's really positive. Of course there's some negativity from people who perhaps don't like change but I really see it as a lot of positive change happening.

It will really change over the next few years with a lot more women and more championing of the roles they do.

What challenges remain to increasing that percentage of women in tech?

People have realised now that it is a problem and that's the first step. Going back 20 years I set up the UK's first online network for women in tech, called BCSWomen, and at the time I was setting it up, most people didn't really see it as an issue, and setting up a group for women in tech was a bit of a weird thing to do. Some men would say 'well why aren't you setting up a group for men in technology?' I'd say 'well you can do that, I'm doing women'.

I don't hear people saying that anymore really. The culture we have now, people in general have accepted it's a good idea that we do need more women in technology and STEM. The battle's half over. Even though the percentage of women hasn't yet gone up I feel like we're on the way and it's going to start happening any time now.

Having something like this clear statement from government that it wants 50 per cent women on the board really sends a message out there to organisations, but also to people that this is what's happening at a high level. I'm sure that we'll quite quickly be able to show that this is successful, and really make some very cool and worthwhile and interesting things happen which are very valuable for government and for the country.

What percentage of women in tech workers would you like to see?

Why not 50 per cent women in tech? For quite a long time in the '60s it was closer to 50 per cent women, and quite a lot of the time women were programming. When thinking about a programmer then, you would think of a woman, not necessarily a man, as we do now. That stereotype hadn't actually happened then. We've gone from having more women in tech to having less and now we just want to take it back again.

You've championed the code-cracking efforts at Bletchley Park during World War Two, which quite a lot of women worked on.

One of the things I learned quite soon when I got involved with Bletchley Park was that more than half the people who worked there were women. At the time I didn't know that and I was quite surprised that I'd never heard about that, so one of the first things I did was try to get that message out there. There were more than 10,000 people working there. With Bletchley Park and the outstations together I think it was more than 8,000 women working in there, but everyone kept it secret for such a long time, so that story was lost from our history, and we didn't really know about that until much more recently.

There's been some debate around gender quotas as a way to improve the percentage of women in tech, do you think they could be useful at all?

When I was younger I thought quotas were a bad idea, but the older I get the more I just think we need something like quotas so that we can make a change.

We need quotas for say, maybe five years, and then we won't need them anymore. Once the boards are more diverse everyone will realise that it was actually a really good idea and you won't need the quota to force people to do it anymore. Otherwise it's just going to take ages.

I've gone from through my career - 20-something years in technology - and now my daughter works in tech and she's in her 30s, and she's had the same kind of issues that I've seen in my career. Stuff like the pay gap, and things may be moving forward but just much too slowly really.

When I was younger I thought 'well it will happen because everyone will realise it's better if we have more women involved', but actually it just takes ages. If you've got quotas you can make a step-change and I think we need a step-change to make something happen.

There was a BBC articlea couple of years ago on the pay gap that said on the current trajectory it will be another 100 years until women get equal pay. I just thought that means I'm going to die and we won't have equal pay - that's not on. That's the sort of thing I've been talking about all through my career and I may not even see it in my lifetime, and that's when I thought we've got to have quotas, because there's no other way I can see to make it happen.

The thing is, it's not just better for women, it's better for everybody. Until people see that, they won't support it or won't think we should have quotas, but I think we've just got to bite the bullet and make the change happen.