In Europe, a convoy of self-driving trucks arrives safely in Rotterdam 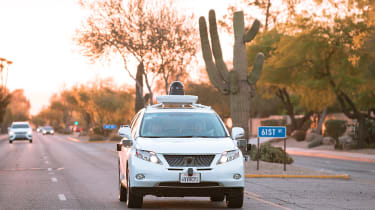 Google is expanding its self-driving car trials to Phoenix, Arizona, to test how well its vehicles perform in extreme heat.

"Arizona is known as a place where research and development is welcome, innovation can thrive, and companies can set up roots," Jennifer Haroon, head of business operations for the Google Self-Driving Car project, told Reuters.

"The Phoenix area has distinct desert conditions, which will help us better understand how our sensors and cars handle extreme temperatures and dust in the air."

Google has been driving four Lexus RX450h vehicles around the Phoenix area to create detailed maps of the roadways, traffic signals and pavement heights.

Phoenix is the fourth major US location that the tech giant will conduct tests of its autonomous vehicles.

Google has spent six years running trials of its fleet of self-driving cars in Mountain View, California, its home base.

It expanded those trials to Austin, Texas, last summer, and earlier this year began running experiments in Kirkland, Washington, which has significantly rainier weather.

The tech company has been enthusiastic about getting its autonomous vehicles approved for full road use, but US federal laws have so far stopped it, and other makers of autonomous vehicles, from being able to realise their full ambitions.

In related news, a convey of 12 self-driving trucks have successfully completed a round trip of Europe.

This was the first time a feat of this kind has been completed on public roads anywhere in the world, according to the EU's Truck Platooning Challenge.

The platoon of 12 connected trucks, from six different brands, travelled 1,300 miles from their manufacturers depots all the way to Rotterdam.

A convoy of this kind differs from Google's autonomous vehicles, which are programmed to deal with a vast number of situations. In this particular case the trucks were following each other on highways and remaining a safe distance apart.

The UK government is planning self-driving truck trials of its on UK motorways later this year.