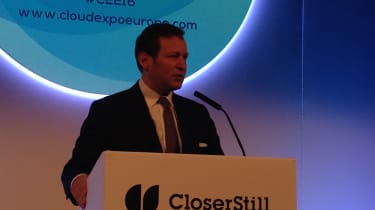 Tech City UK has become a "beacon" for the country's business interests, Ed Vaizey has said.

The minister for culture and the digital economy told delegates at the Cloud Expo Europe in London today that he was originally doubtful of the government's initiative, launched in 2010, to invest in and nurture upcoming UK start-ups, but it has surprised him.

"I have to say, I was not an early adopter of Tech City. I was quite sceptical," said Vaizey.

"But I've been proved entirely wrong. What Tech City has done is it's provided a forum for the tech community as a whole to have a conversation with government."

Vaizey said that the fast-changing nature of technology has made it especially important that an industry body, like Tech City UK, exists. He also emphasised how Tech City has become a national organisation, and a symbol for UK business.

"It now represents clusters all over the UK," he said. "It allows us to identify particular sector specialisms in Manchester, Leeds, Bradford or anywhere else in the country where we can clearly focus our policy, and our export/import initiatives on.

"Tech City has become a beacon for the UK. It's become a sort of shorthand to say that we're a tech-friendly government. It's enabled us to engage with inward investors, but also to send out a message, particularly to those in Europe, that the UK is a great place to come and do business if you're interested in tech."

Earlier that day, Tech City chair Eileen Burbidge also talked up the UK, saying it was capable of producing its own Facebook-like success story from the financial services sector.

During his speech, Vaizey celebrated the efforts of his government, and its partners, in helping make Britain an attractive and progressive place for technology businesses, as well as putting coding on the school curriculum.

He added his government wants to be "at the forefront of innovation".

"As a government, we've taken the view that the changes that technology brings should be embraced rather than resisted," said Vaizey.

"We want to put early seed money into research and development. When the sharing economy comes along, instead of saying: how can we protect the old industries?' We've said: what are the regulations that are holding back the sharing economy?'

"And the same goes for smart cities and the internet of things."

Vaizey said that this would be possible because of partnerships between government and business. He went on to say the government wants to be a custodian that will help companies reach their potential.

Vaizey warned that the next level of changes are coming for the UK tech community, and they are going to disrupt how we all connect and the industry standards we use.

He said: "Businesses will need to decide where the best value is for they customers, and work out what the new ecosystems are. And consumers will have to make their own decisions. Futuristic scenarios will give us ideas, but lasting practically value will depend partly on what technology we want to live with.

"We're not going to try and second guess what technologies going to bring or change. But we do want to listen and be pioneers in terms of research."

Part of that pioneering ethos, he said, has begun with a 26 million investment in IoT UK projects for three years to advance the country's competitiveness in IoT developments. Later that day, during a session on cloud regulation and security, Microsoft's cloud computing director, Rudiger Dorn, praised the UK government's "progressive" regulation of cloud technologies, saying it was among the best in Europe.

Later that day, during a session on cloud regulation and security, Microsoft's cloud computing director, Rudiger Dorn, praised the UK government's "progressive" regulation of cloud technologies, saying it was among the best in Europe.