Female leaders urge women in tech to be sponsored and celebrated

Female professionals from Fintech, Cisco, Ikea and more shared ideas for getting more women into tech 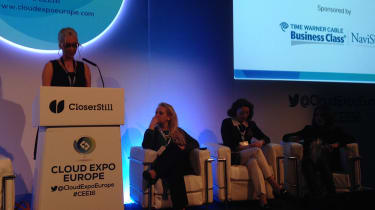 Sustained sponsorship and support from male colleagues are necessary to help get more women into core technology careers and leadership positions, according to female leaders in the tech sector.

Female leaders from Fintech Circle, Cisco, Ikea, and others, spoke about what can be done to open more doors for women in the technology business, as well as the challenges they have faced on their respective career paths, at Cloud Expo Europe in London on Tuesday.

Highlighting positive role models and forging by-women-for-women networks were two of the ways that Dorothee Fuhrmann, co-founder and COO of Prophis Technologies, a financial services provider, felt will help get more women involved.

For women who are already in business, particularly in large organisations, Fuhrmann felt added backing will help them reach their potential: "Sponsor women don't mentor them, sponsor them. Have people be responsible for their career path. Make sure their name is heard and is put out there."

Evelyn de Souza, data privacy and security leader for Cisco Systems, agreed with Fuhrmann, saying switching from "mentorship to sponsorship is so important, because when you do that you can actively promote women".

Female professionals have to prove themselves more often'

The importance of support from spouses, friends and other colleagues was mentioned on a number of occasions during the panel.

Alejandra Leon, an IT architect and engineer at Ikea Systems, responsible for the Swedish retailer's VR experiments, said female professionals have to prove themselves more frequently than their male colleagues.

"When you're [a woman] in different industries, and at the top, you always have to work harder. I feel like, many times, I have to prove myself a lot harder than my colleagues," said Leon.

"It's not easy. And on top of that, you have to balance family as well. I have two kids and a small baby now. You need a lot of support from your family and your partner."

Balancing parenting and a career highlighted "societal norms" that Leon, Fuhrmann and other panellists said must change.

Among them, Fuhrmann described the "prejudice" she has felt when she tells some people her partner is a stay-at-home father. Jennifer Arcuri, founder of Hacker House and Faraday Pro, said it was wrong to punish girls for showing initiative, giving an example of a girl who hacked her school to prove a point. And Fintech Circle's Chishti said, "we must encourage mothers not to leave the workforce working mothers are the best leaders".

What next for diversity?

All of the panellists agreed that girls must be encouraged from an early age that STEM subjects and STEM-related career can be for them.

Earlier in the session, Cisco's De Souza said: "there has never been a better time to be a woman headed to be a CEO than today". She suggested there has been more of a push by the tech industry to address diversity today than ever before.

She added: "Careers are not necessarily linear. We see people leading what Jane Fonda terms multi-faith careers. So you may start your career in something, and then migrate to a different sector. So, for women, I encourage you: you may not have started as an engineer [but you can pursue that]. I certainly didn't; I started as a music teacher."

The panel's final thoughts were on how each of them, and others, could empower women.

Jacqueline Johnson, head of IT security architecture for Nordea Bank, who also teaches at the Copenhagen Business School felt empowering women and girls was about working more closely together: "We need to go beyond just female networks. It's much more about integrating with male networks, too. Otherwise, it's just us and them."

Ikea System's Leon said the myth that coding is difficult must be broken: "Code is not difficult. And we must also [promote the range of] roles in IT. You don't need to be a coder; there are several different roles you could take.

"It's not about men and women: it's about how we can work together."

Fintech Circle's Chishti said: "Diversity is an issue for all of us, and an opportunity for all of us. It's something we all need to work together on to ensure fifty-fifty parity."

De Souza added: "When we look at diversity, it's not just about men and women. It's also about ethnicity balance and balance across different age groups."

Getting more women involved in technology has been a difficult challenge for all those at the forefront of change.

A 2015 report by the UK government found that the number of women in tech had fallen by seven per cent in 10 years. Later that year, women we spoke to told us that the gender pay gap and "glass ceiling" were both imbalances that were handicapping real change.

On International Women's Day this year, we examined whether diversity quotas have helped or hindered efforts to bring more women into the technology workforce.