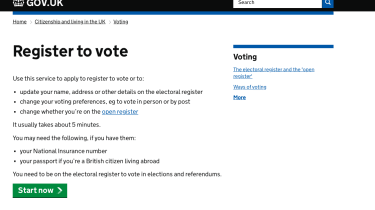 The deadline to register to vote in the EU referendum has been extended until midnight tomorrow (Thursday) after the website crashed, the government has confirmed.

Minister for the Cabinet Office Matt Hancock said: "Following discussions with the Electoral Commission and strong cross-party support expressed in the House of Commons, we will introduce secondary legislation to extend the deadline for voter registration until midnight tomorrow.

"Having taken the decision today, we think it is right to extend to midnight tomorrow (9 June) to allow people who have not yet registered time to get the message that registration is still open and get themselves registered."

The decision comes after the Electoral Registration website crashed yesterday evening at 10.45pm as thousands of people tried to register to vote in the upcoming EU referendum.

Unable to cope with the "unprecedented traffic" of 500,000 people trying to sign up yesterday, the website suffered an outage, a Cabinet Office spokeswoman confirmed.

Pressure to shift the voter registration deadline forwards from last night came on the government from senior politicians and the Electoral Reform Society.

The Electoral Commission told IT Pro any decision to move the voter registration deadline further forward than last night rested with the Cabinet Office.

The Leader of the Commons is due to make a statement to Parliament later this afternoon.

Pressure is growing on the government to extend the voter registration deadline for the EU referendum after the website crashed, losing thousands of people's applications.

Up to 50,000 UK citizens were left unable to register when the Gov.uk page toppled under the sheer weight of people signing up for the 23 June vote.

The registration deadline had been due to expire at midnight, but senior politicians and organisations are urging the government to give people more time after yesterday's crash.

Labour leader Jeremy Corbyn tweeted: "I'm told https://www.gov.uk/register-to-vote  site has crashed so people can't register to vote for #EUreferendum. If so, deadline has to be extended."

Katie Ghose, chief executive of the Electoral Reform Society (ERS), said this morning: "It's clear given the technical errors last night that the registration deadline should be extended."

She claimed 27,000 people had been using the site when it crashed at 10.45pm yesterday, while others put the figure at double that.

Half a million people registered to vote yesterday, according to Gov.uk data, with 170,000 applications alone coming from people aged 25 to 34.

While the main web page was accessible, the Start Now' button was not functional, according to the Independent.

Half an hour later, the site was working for some but not others, with @GovUK tweeting: "Please keep trying to register to vote at http://gov.uk/register-to-vote . Some people are getting through, sorry if you have experienced issues."

At 12.30am, it tweeted: "The technical issue on http://gov.uk/register-to-vote  has been fixed, following very high demand. We're sorry if you have experienced issues."

"Everyone turned away needs time to hear about the extension and to sign up, and a day might not be long enough given the high numbers involved."

A Cabinet Office spokeswoman said: "We became aware of technical issues on gov.uk/register-to-vote late on Tuesday night due to unprecedented demand.

"Some people did manage to get through and their applications were processed. We tried to resolve the situation as quickly as was possible and to resolve cases where people tried to register but were not able to."

It is not clear whether applications are still being accepted, and the Cabinet Office declined to confirm if the deadline will be extended.

The government has blamed "high demand" for overburdening its website servers, causing the site to crash as people tried to apply to vote before the deadline.

"If [your] website is likely to experience peaks in demand, at times when it's critical for your audience to have access, then you need to be confident that it can handle the extra traffic," he said.

"There's a lot of ways to manage this, from load testing in advance, to identify how the site performs under high traffic, to user-experience management systems that enable the website owner to monitor the journey of every user. These measures really aren't a luxury they're a necessity, as last night's outage all too clearly reminds us."