Young people must be encouraged to adapt for digital future, experts say 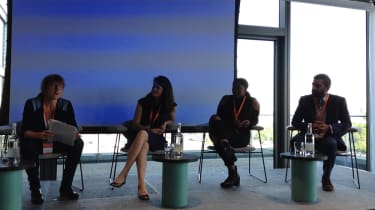 Britain's "stagnant" education system is not equipping young people to become good digital workers of the future, a panel of experts have said.

Young people need to be encouraged to have agency and taught to be adaptable if they are to thrive in the future jobs market, said panellists, including Baroness Beeban Kidron, investor Olivia Streatfeild and independent educator Benika Brown.

"If we want digital workers we have to accept the idea of digital citizenship. And citizenship means having rights, as well as having responsibilities."

Baroness Kidron and her fellow panellists were speaking at a London Tech Week discussion about the future of work on Friday.

Artificial intelligence and robotics are changing the course of work, and there have been predictions that as many as five million people could be made redundant by 2020, because of how technology is transforming business.

"Robots can't be as creative as humans. We can see things beyond any software. We are people that created them. We need to get children in the mode of being creative, making new ideas and pushing the technology forward," she said.

"But because the school system is as stagnant as it is, children are at a disadvantage: computers are elevating before they are.

"It's about changing the system so children can control the technology when they are in a position to do so, rather than being controlled by it."

An out-dated school system, which "does not reflect the times we're living in", is also affecting things beyond how young people choose their first career or place of employment, the panel said.

Workplaces, too, must change, they said and established employment processes, such as representing talent and skills in the form of a CV, should change with it.

Gi Fernando, founder and group CEO of Freeformers, and organisation helping society and businesses with the digital transition said the model of knowledge storage, or knowledge banking, which much of education and business adhere to, is rapidly being replaced by a world of "streamed knowledge".

"If we're not teaching that, then you have a real danger of inequality and separation."

Looking beyond entry-level jobs, and to young adults later in their careers, Baroness Kidron said we have "retreated from the ways of learning throughout life that has to be instituted in future. You actually have to learn things throughout your whole life".

"Our careers are non-linear and we're going to have to reinvent ourselves many times over. And those cycle times are getting, faster and faster," said Olivia Streatfeild, a partner at angel investment firm Freston Foundry.

Curiosity, confidence, challenge and a desire to continually improve are what Streatfeild recommended young people should be encouraged to think about in their career decisions.

She suggests that there will have to be a cultural framework around technology in order to adapt people to the new methods of work.