The cryptocurrency surpassed the $1,000 mark for the first time since December 2013, more than doubling in value from $432.58 at the start of 2016, according to XE's currency chart. 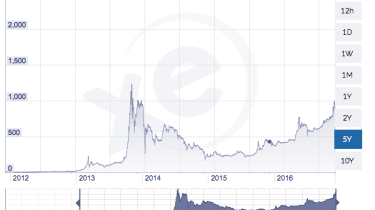 Some observers attributed its 125% climb in value to growing interest from China, according to the Guardian, whose national currency, the Yuan, lost 7% of its value last year. China is where most bitcoin trading occurs, according to Reuters.

"The growing war on cash, and capital controls, is making bitcoin look like a viable, if high risk, alternative," said Paul Gordon, a board member of the UK Digital Currency Association and co-founder of Quantave, a firm seeking to make it easier for institutional investors to access digital currency exchanges.

Bitcoin outperformed all central bank-issued currencies over 2016, but is a volatile medum of exchange. Following its 2013 spike, Bitcoin had lost half of this value by mid-February 2014 after Mt. Gox - the largest Bitcoin exchange at the time - halted withdrawals, before filing for bankruptcy later that month.

However, CoinDesk predicted that this time around, Bitcoin's value will continue to rise, writing: "As asserted by analysts, 2017 is expected to be a banner year, one that could finally lead the price to pass its all-time high of $1,216.7 set in 2013."