The six most expensive words in education tech

How your school could afford high end devices like iPads 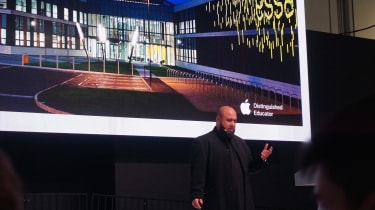 The six most expensive words in education are: "We've always done it that way".

That's according to Abdul Chohan, director of development at Essa Academy, who opened Bett 2017 with a detailed look at rolling out Apple's devices and educational platform across his school - answering the most frequently asked question, how he paid for it.

But he argued that radically rethinking how technology is used in classrooms need not cost more, saying "we've always done it that way" are the "six most expensive words in education".

Chohan described the tech hell many teachers make do with, dubbing it the laptop trolley experience, wherein they wheel 30 laptops into the room, knowing full well some won't work and the logins will trip up students. "If my laptop trolley doesn't work, I'll print 30 sheets just in case," described Chohan.

It can be better, he believes. His school, Essa Academy in Bolton, draws 80% of its students from areas of deprivation, making innovation a difficult task. But several years back, he started what he called an "ambitious project".

Rather than renewing the laptop trolleys, Chohan bought mobile devices - at the time, iPod Touches, upgrading to iPads in 2010 - for every student, allowing them to email, take pictures and record voice, as well as use apps and ebooks. "We began to see the power of something simple and reliable," he said. "This thing became our digital pencil case."

The iPod Touches weren't only handed out to students. "Put that in the hands of our caretaker, and suddenly he can prioritise things," said Chohan. "He doesn't have to go to noticeboards to see what's next on his list."

But how does a school in a deprived area - let alone any other - afford a pricey tablet for every student? Apple's marketing team will love Chohan's maths: he says by year two the project was already saving the school money over laptop trolleys.

There were other savings. The school was renovating at the time the project kicked off, and the switch to tablets saved infrastructure costs, including desks and cutting the number of photocopiers from nine to three.

There's still a computer lab with standard machines, "but you don't see computers everywhere," he said. That allows computing science to be taught on standard computers, though Chohan also sung the praises of programming apps such as Swift Playgrounds, which can be used on iOS.

Chohan also questioned the necessity of buying new textbooks every year, with his teachers producing some of their own educational materials. "We have the knowledge, we are teachers, we are curators of information - so we started this project of making our own textbooks," he said. They're now in Apple's bookstore and are available to download by other educators for free.

The digital books can also make use of 3D diagrams and video, particularly handy for Essa's many students who don't speak English as a first language, as they can repeat videos to hear a word or pause them to look that word up.

For schools that can't afford to immediately ditch the "laptop trolley model," Chohan points to schools that have slowly shifted away, buying tablets - Apple or otherwise - when budgets allow or when it's time to upgrade existing laptops.

Chohan countered questions that the setup he describes is too reliant on technology. "This is all about good teaching and creating the right environment in the classroom," he said. "There are definitely times you don't want students to use iPads or use technology, and that kind of discipline is needed."