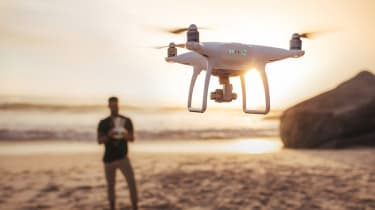 Manufacturers have slammed a recent report from the UK government on the dangers of drone use, describing the results as "alarming" and inadequate for forming the basis of regulations.

The Department for Transport commissioned a report into the use of drone technology following a number of close calls with aircraft, including an incident in July when a drone forced the closure of a runway at Gatwick airport.

The findings of the Mid-Air Collision report argued for tougher regulations, including forcing all hobbyists to take competency tests and register for licences.

The Drone Manufacturers Alliance Europe (DMAE) argues that the testing involved was inadequate, and has called for the full findings and methodology to be released to the public.

The DMAE, a coalition of leading manufacturers accounting for almost 80% of all civil drones, added that it "strongly believes drone regulations should be based on scientific studies that quantify risk in order to minimise it".

The study, performed by research firms QinetiQ and Natural Impacts, aimed to test what impact a drone weighing 400g to 4kg would have when colliding with an aircraft's windscreen. Yet the alliance claims it is unclear what specific drones were tested, or how they performed during the impact tests.

"Some of the most alarming findings in DfT's summary are based on an object that resembles a javelin more than a drone," said Daniel Brinkwerth, a spokesperson for the DME, said in a statement. "The study's authors could not find a way to launch a 4-kilogram drone against an aircraft windscreen, so they mounted two motors, a heavy camera and an oversized battery on nylon arms."

"This object could never fly, much less encounter an airliner at high altitude," added Brinkwerth. "Researchers need access to the full test results to understand whether this is an acceptable shortcut for scientific research."

The DMAE also highlighted that the report raised few concerns about the smallest drones, which are the most popular type for private use, and even noted that plastic housings used to protect the devices acted to mitigate the damage caused in collisions.

The US Federal Aviation Administration made a similar evaluation in April, when a peer-reviewed study found that smaller drones were far safer to operate around people than earlier tests had assumed.

"Many of the shortcomings in this summary report could have been addressed during the research process with more robust participation from all stakeholders," said Brinkwerth. "All the major drone manufacturers stand ready to assist with further studies by providing materials for testing as well as research assistance from our experts."

24/07/2017: Drones in the UK may soon have to be registered and users will have to sit safety awareness tests, the government announced on Saturday.

Anyone who owns a drone weighing 250 grams and over will have to register it online or through an app in future, as the UK government hopes to "improve accountability and encourage owners to act responsibly".

Pilots will have to sit a drone safety awareness test to demonstrate that they have an understanding of UK safety, security and privacy regulations.

A spokesperson for the Department for Transport (DfT) told IT Pro that it will seek to introduce the rules as soon as possible, exploring how to do this in the next couple of months, but that they may require Parliamentary approval. The rules will apply to both new and existing drones once they come into effect.

The government also hopes to expand its use of geo-fencing, where drones are prohibited from entering certain areas such as airports. The technology could be built into drones, using their GPS coordinates to stop them flying into areas like airports and prisons once they hit a pre-defined boundary.

"Some manufacturers have already programmed their drones not to fly in sensitive areas but the government would like to reinforce this work," the government said.

These new rules follow research finding that drones could potentially damage the windscreens of helicopters. The research, conducted by the DfT, British Airline Pilots' Association (BALPA) and the Military Aviation Authority (MAA), found that airplane windscreens are much more resistant and would need a heavier drone, of around 2kg, to cause damage, and only if it is flying at a high speed.

Aviation minister Lord Callanan said: "Our measures prioritise protecting the public while maximising the full potential of drones. Increasingly, drones are proving vital for inspecting transport infrastructure for repair or aiding police and fire services in search and rescue operations, even helping to save lives."

He added: "But like all technology, drones too can be misused. By registering drones, introducing safety awareness tests to educate users we can reduce the inadvertent breaching of airspace restrictions to protect the public."

While drones have plenty of possible use cases, such as delivering goods to people's homes, legislation has not kept pace with development of the technology. Meanwhile, police have been forced to crack down on drones carrying drugs to prisons, and people have flown drones dangerously close to planes.