Only competition can save the UK from its broadband crisis 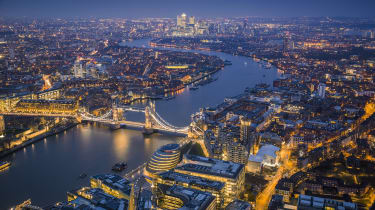 The UK has never been known as a land of fast internet. We consistently underperform in global tests for speed, reliability and coverage, and we're one of the worst when it comes to the rollout of full-fibre. It's perhaps unsurprising, then, that the country's woeful connectivity ratings became a cause for concern after the vote to leave the European Union, as the UK now finds itself competing with not only the likes of US and China, but also with some of its closest neighbours and former colleagues.

While a member of the European Union, the UK contributed to the creation of a continent-wide initiative that will see the standardisation of broadband, an EU digital strategy ensuring consumers and businesses are able to take advantage of state-of-the-art technology. Now we're no longer a part of that scheme, the government has been forced to present its own digital strategy alternative, the proposals for which emerged in March this year.

The problem is that government's Broadband Delivery UK (BDUK) proposals are lofty at best, and are confounded by voluntary pledges by BT and Openreach. Here's a breakdown of what exactly has been proposed so far:

Aside from the fact that 2Mbps is laughably slow compared to the global stage, the government's early measures have already faced criticisms from an industry that feels they're not enough to meet the UK's digital needs. To make matters worse, the government rejected an amendment from the House of Lords earlier this year that would have seen the USO bumped up from 10Mbps 30Mbps.

We're now approximately six weeks away from the self-imposed broadband deadline, and while the government lauds the progress made towards 100% coverage, customers are still complaining of receiving raw deals from ISPs. A report published only last month found that over half of the country still suffers from frequent broadband blackouts and price hikes, while as few as one in ten households are receiving advertised speeds.

"Industry observers were quick to cast doubts over the UK Government's claim that 95% of the country would receive superfast broadband services by the end of this year," says ViaSat's EMEA VP Marc Agnew, speaking to IT Pro. "Rightly so the UK digital strategy's targets for broadband rollout were clearly overly optimistic.

"You only need to read Ofcom's latest standards on internet performance claims to see the difference between areas that are covered and those that actually have a usable broadband service. The gulf is massive."

Yet for all the difficulties facing the government over broadband rollout, when it comes to full fibre the UK is one of the world's worst. Fibre broadband, of course, exists in the UK and is supplied by the likes of BT, Virgin Media and Sky, but the overwhelming majority of these connections rely on routing cables to a roadside cabinet, creating a bottleneck for traffic before the service even reaches your home or building.

In fact, the UK is so bad at connecting fibre cables directly to a building that it's regularly left off global ranking reports which have a baseline 1% coverage requirement.

To its credit, the government realises the dire situation the UK is in. Earlier this year, as part of its 200 million fibre commitment, the government launched a fibre-to-the-home (FTTH) trial, in which six projects from regions across the UK were given 10 million to begin testing connections capable of sending up to 1,000Mbps straight to the front door. As admirable as this policy may be, though, the government's handling of the rollout has been criticised.

Ronan Kelly, CTO of ADTRAN and president of the Fibre to the Home Council Europe, argues that the government's efforts are misguided and seriously underutilise the existing expertise in the UK.

"The big question with regard to this initiative is what exactly are they testing," says Kelly, speaking to IT Pro. "There are already a number of fibre-to-the-prem operators in the UK that are addressing both the needs of residential and business customers, and have been for a number of years. If they were approached by the government, [they] could share a lot of detailed insight into the very real challenges faced with building out these fibre infrastructures."

"I don't know whether it's a diluted approach or they're trying to appease some faction out there, and hence they're calling it a trial," adds Kelly. "I'm not sure what the logic is."

Before any serious investment can take place, the government needs to address the elephant in the room the UK's stagnant fibre market. The country is almost entirely reliant on Openreach for its infrastructure, yet the government has been notably quiet when it comes to competition policy, despite consistent calls for change.

In July 2016 the Business, Energy and Industrial Strategy committee urged the government to ensure there were clearer and more robust regulations around competition to encourage investments. Almost a year later, the same call was made by Ofcom, which wanted to see a "level playing field" within the fibre industry by allowing competitors to lay their own cables using Openreach's tunnels and telegraph poles.

"Fundamentally, the government has to acknowledge that while today there is a substantial infrastructure available there through Openreach, and while some of that infrastructure is being opened up for third parties, the reality is that they still need to put protections in place for those operators that embark on building out their own fibre infrastructures," says Kelly. "You have to ensure that you don't get tactical overbuilding as a retaliatory action from the operators that have scale."

For example, if a competitive operator moves into a new area with its own brand of fibre services, there's nothing to stop an incumbent provider from creating its own equivalent service and forcing the new player out of the market.

The vote to leave the EU places even greater pressures on the government, according to Kelly, as the UK will soon find itself competing against the European Union's own digital strategy efforts.

"I would be seeking to make sure that the UK had the best digital infrastructure in the world, because the UK is now arguably on its own competing against the world," says Kelly. "Is it doing enough to achieve that? I don't think it is."

"The world is increasingly going digital, the cash flows are moving to where all the key digital services are, and you're either part of that or you're not. In my opinion, the ones that will be part of that, will have as a baseline a best in class digital infrastructure."