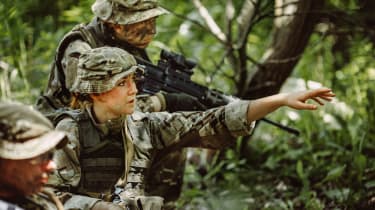 The National Audit Office (NAO) has blamed both the Ministry of Defence (MoD) and its IT supplier for severe delays in the delivery of the Army's new online service which has contributed to missed recruitment targets for six years running.

With the British Army seeking to reform its recruitment processes in 2012, the organisation struck a deal with professional services firm Capita as part of a 1.36 billion ten-year commitment to its Recruiting Partnering Project.

But several failings, including delays to an online recruitment tool and rising costs, have meant that in every year since the start of the contract the Army has missed its recruitment targets, the NAO concluded.

"A core part of the Project was online recruitment, but the Ministry of Defence failed in its contractual obligation to provide Capita with the necessary IT infrastructure to enable this," the public auditor said.

"It passed responsibility for developing the online system to Capita, but due to the complexity of the Army's requirements, system development was delayed even further. This resulted in the online system launching over four years (52 months) later than originally planned, at a cost of 113 million, triple its original budget."

The public auditor found in its 41-page report that both the MoD and Capita failed to assess whether an entirely automated recruitment process, with online-only interactions for prospective recruits, was appropriate for a military context.

Under the agreement, the MoD was tasked with building the IT infrastructure to host Capita's recruitment software, with the platform expected to launch in July 2013. But following setbacks, the department accepted in December 2013 its approach was not working, and passed responsibility for the entire project to the firm in January.

Recruitment efforts were hampered further when a decision was made to cull the number of recruitment offices from 131 to 68 in anticipation of the new platform, with the MoD putting its full faith into the idea of automated recruitment.

Capita then eventually launched the system in November 2017, 52 months after the initially touted launch date, and 24 months late according to a revised contract. The Army also spent 113 million running the legacy system and developing new systems, due to the time it took for the new platform to come into place.

The NAO report savaged Capita's handling of the IT project once this fell under its wing, meanwhile, claiming the firm failed to recognise the level of customisation the Army demanded, and that it took longer than expected to write a bespoke application.

Once the system came into force, Capita staff also faced difficulties processing applications, which led to 13,000 fewer applications between November 2017 and March 2018, according to army estimates.

The Army's aim was to recruit more effectively and to achieve savings of 267 million by 2022, but the NAO now says the project will categorically not achieve these savings.

Despite changes to the project's overall approach, including having a refined online system in place, and a change in method as to how prospective recruits are engaged, the Army's targets are still not being met.

The cost of the contract, too, has risen from 495 million to 677 million mainly due to the additional cost of developing the online system, and changes to recruitment strategy. The Army, however, has projected that the overall cost of the programme will remain within the 1.36 billion budget up to 2022.

This is the second major report outlining severe issues with the outsourcing of government IT projects to Capita after the NAO similarly savaged a deal between NHS England and the professional services firm in May.

The public auditor slammed the seven-year 330 million cost-cutting deal, which aimed to transform a 20-year-old IT system, and claimed the botched handling of the contract put patients at risk.

"As the NAO report states, both Capita and the Army underestimated the complexity of this project," a Capita spokesperson said.

"Our focus is now on working with the Army to deliver a recruitment process fit for the 21st century.

"We have overhauled governance on the contract and are already seeing improvements, with applications at a five-year high and a reduction in the amount of time it takes candidates to join the Army. We are absolutely committed to getting this partnership right."

IT Pro also approached the MoD for comment but the department did not respond at the time of publication.