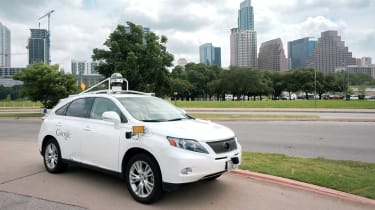 Transport ministers have been in "active discussions" with Google to encourage the company to trial its driverless cars in London.

Google is one of the firms leading the way in autonomous vehicle technology, but so far it has only trialled its driverless cars in the US.

Convincing the company to trial its cars in the UK would be a coup for the Department for Transport (DfT), which has spoken to Google "at least half a dozen times" in the last three years, according to a report by Sky News.

"It's going to have to work in big cities so why don't we start trialling it now?" deputy mayor for transport Isabel Dedring told Sky News.

"We met them a few weeks ago to see whether they would do trials here.It is still very early days but we would be keen for trials to happen in London whenever Google are ready to move them into other countries."

Google's driverless cars use sensors and cameras to "observe" their surroundings, and machine learning to perform the manoeuvres required to get them from A to B.

The company has retrofitted existing cars with its autonomous technology, such as Lexus SUVs, and is also experimenting with custom-made cars of its own.

It recently said it willexpand its trials to the state of Washington, in addition to trials that are already underway in Mountain View, California and Austin, Texas.

The government said it wants the UK to become a "global centre for the fast-growing intelligent mobility market", which it estimated will be worth 900 billion a year globally by 2025.

Jaguar Land Rover is involved in the MOVE-UK project, which aims to accelerate the development, market readiness and deployment of automated driving systems.

Driverless cars are being trialled in four areas of the UK this year: Bristol, Coventry and Milton Keynes, and Greenwich. Converted Heathrow shuttles are to be among the first to be trialled in Greenwich this July.

Evangelists for autonomous cars in the UK have also been keen to highlight what the significant of these new projects could means for the British engineering and technology industries.

Commenting on the government's 20 million investment in automonous cars, business secretary Sajid Javid said: "Britain is a world-leader in research and development in such innovative technologies which improve lives and create opportunity for all. That is why this government has protected the 6 billion science budget and is providing up to 20 million for these projects."