Intel and Digital Schoolhouse team up to get kids coding 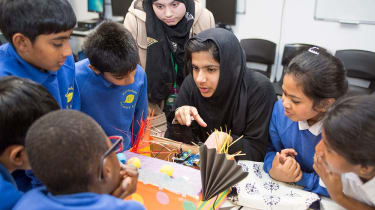 As more and more of Britain's industry becomes reliant on technology and coding, there is a growing concern over the widening skills gap facing the country's workforce.

Government initiatives like 2014's Year of Code' have been trying to address this problem, by placing greater emphasis on educating the nation's children in these areas. As part of this, the government has allocated resources including a 500,000 fund for training teachers in the area.

Chip maker Intel is also hoping to improve the situation, and has put considerable weight behind its education division. The company provides end-to-end IT education solutions, providing equipment and training to help encourage and support teaching and learning around IT.

One example of this is through the use of Galileo. A cheap, single-board computer similar to the Raspberry Pi, Intel's Galileo is intended to get students interested in programming and tech, and has been used in institutions like Burntwood School in Wandsworth.

Using LEDs, propellers and basic sensors, the kids learn about programming fundamentals like inputs and outputs to create projects like night lights, powered by Galileo. IT Pro spoke to Dr. Jennifer Osodo, a teacher using Galileo in her lessons, about integrating the device with her classes.

"It has been tremendous," she says. "It makes teaching really exciting, because it makes the students develop models that they think about themselves, and they spend time figuring out how they're going to control the devices, and I think that's a really important part of computing."

"The advantage with Galileo is it enables children to do the unplugged activities. Apart from just coding, they develop their models, which is unplugged, then they go into coding and think about how they're going to control it."

Dr. Osodo is part of the Digital Schoolhouse project, which is an initiative run by games industry trade body Ukie to get kids interested in computing before they hit secondary school. "We want to make learning playful", she says. "Children in primary school have been exposed to computers as a box, where they just control it from the outside."

Instead, they want kids to get hands-on with tech at an early age. The programme and its use of Intel's Galileo board has parallels with the BBC Micro:Bit and Raspberry Pi's ever-cheaper devices, all of which want to inspire children to join the growing wave of home makers and hobby coders.

Rather than simply dropping affordable computing devices on schools and leaving them to their own devices, however, Intel's focus is much more on providing a support network to enable continuous development.

"Through Intel's work in education, we're equipping teachers to create and mentor the next generation of lifelong learners," said Roz L. Hudnell, vice president in Human Resources, director of Corporate Affairs at Intel and president of the Intel Foundation.

"Increasingly, businesses have a key focus on technology, and it's essential that students are prepared with digital skills to achieve economic empowerment."