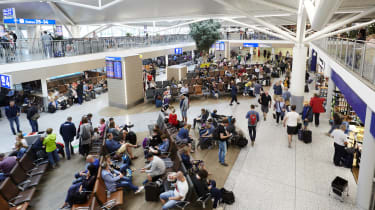 Bristol Airport's departure and arrival boards haven't been working for two days after a ransomware attack affected its operation.

A spokesperson said it was necessary to take the boards down to prevent the rest of the airport's computers being affected too.

"We believe there was an online attempt to target part of our administrative systems and that required us to take a number of applications offline as a precautionary measure, including the one that provides our data for flight information screens," spokesman James Gore told the BBC.

"That was done to contain the problem and avoid any further impact on more critical systems."

However, he also added that the attack was a speculative attempt to break into the computing system rather than a targeted attack specifically on Bristol Airport and flights have not been affected as a result.

He said that safety and security of its passengers or staff were never affected and although it has taken longer to get the departure and arrival boards up and running, it was because the airport wanted to make sure other aspects of computing infrastructure wouldn't be affected.

"Given the number of safety and security critical systems operating at an airport, we wanted to make sure that the issue with the flight information application that experienced the problem was absolutely resolved before it was put back online," Gore finished.

Engineers are now working to get the boards back up, but the airport was quick to stress that hasn't involved paying the criminals the ransom they have demanded, but quarantining and fixing the affected files.

This is not the first time tech problems have caused havoc with Gatwick's information boards, as a faulty cable knocked them offline back in August.