Mixed reports suggest a relatively new form of ransomware, LockerGoga, is behind the firm’s IT issues 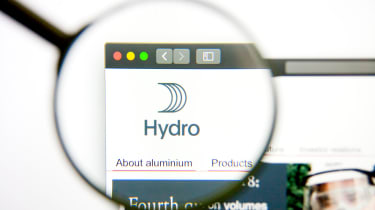 Hydro, one of the world's biggest aluminium producers, has suffered a cyber attack, forcing its smeltery to continue operations manually.

The company runs operations in 40 countries, is based in Norway, and employs more 35,000 people. It said that the "extensive cyber attack" had impacted the operations of several business areas.

"Hydro's main priority is to continue to ensure safe operations and limit operational and financial impact. The problem has not led to any safety-related incidents."

Speaking to the Reuters agency, a spokesperson from the Norwegian National Security Authority (NSM) said the company had been exposed to a ransomware known as LockerGoga, a claim which a Hydro spokesperson declined to confirm.

Hydro said in a more recent update via its Facebook page that most of its business areas are running as normal, albeit on analogue operational systems. The only caveat was that a "lack of ability to connect to the production systems [is] causing production challenges and temporary stoppage at several plants".

Hydro said that the relevant authorities have been notified and are supporting the metal manufacturer through the situation.

Until we get any real confirmation on the specifics of the attack, we can't say for certain what exactly happened. "The things we don't know outweigh the things we do know, and that generally means there will be a lot of speculation," said Tim Erlin, VP at TripWire.

IT Pro contacted several analysts about this and there seems to be some consensus on the method of attack, providing reports which suggest it was a ransomware attack can be believed. Most seem to think that in order for the attack to take place, the attacker would have had to deploy the ransomware manually.

"The description of the attack from NOR-CERT so far sounds like the attackers manually deployed the malware after gaining access to the networks," said Chris Doman, security researcher at AT&T Cybersecurity.

"The take-down of a number of different geographic locations is reminiscent of the kind of damage seen in incidents like NotPetya."

Kevin Beaumont, security operations centre manager at BNFL, speaking to the BBC, echoed Doman's thoughts. He said that if the LockerGoga ransomware had been used, then it was likely planted manually by an attacker that gained administrator privileges.

"For an industrial manufacturing business this is potentially bad news, as it may have spread across their company, including near industrial control systems," he added.

Whether or not the attack was caused by ransomware, analysts are keen to express how important it is to continually monitor systems for vulnerabilities.

"This attack provides a lesson in the value of both network segmentation and ensuring that threat models are created, assuming the threat comes from an internal source," said Tim Mackey, senior technical evangelist at Synopsis.

"With increasingly sophisticated attacks, organisations must assume attackers could compromise internal systems as easily as they might attempt to breach a firewall into a production system."

Comparisons have been drawn with the Russian-linked NotPetya attack that struck businesses in 2017, just a month after WannaCry crippled Britain's NHS systems. Of these businesses, shipping giant A.P. Mller-Mrsk was affected hugely - all of its IT systems were rendered useless.

In an event like this, companies are reduced to unorthodox methods in order to maintain operations and keep the chain of command alive. In A.P. Mller-Mrsk's case, the firm famously turned to WhatsApp group messaging and Google Drive file transfers in order to pass down messages through the ranks and fully restore systems.

"We planned and scheduled vessels with marginal data, without incurring delays outside of our normal planning. Many people used their own equipment and took late-night phone calls to make this happen. It was a team effort across the board," says Stephen Davis, Maersk Line's marine manager on the US east coast.

In the wake of the 10-day NotPetya ordeal, A.P. Mller-Mrsk was forced to scrap and replace between 1,500-2,000 of its systems, incurring a total cost of $300m and a marvellous effort from those tasked with replacing the systems. Caleb Barlow, vice president of IBM's X-force threat intelligence cyber security team, said a job like that would usually have taken over a month, but they got it done in a matter of days.