A good fit for the boardroom, but disappointing battery life and tawdry ports leave it lacking 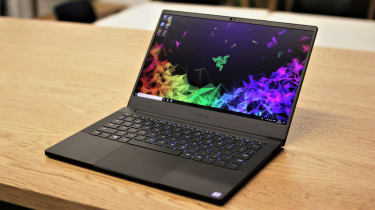 Since debuting the Blade Stealth in 2016, Razer's line of 13.3in ultrabooks has undergone a handful of design and functionality tweaks, becoming sleeker, more portable, and not to mention more powerful with each generation.

Its late-2018 ultrabook is a statement machine that not only goes toe-to-toe with the biggest high-end names on the market, including the Dell XPS 13 and Microsoft Surface Book 2, but has all the core ingredients of a MacBook-killer. Regardless of potential, however, it's the execution that counts.

At first glance, the late-2018 Blade Stealth is a sleek and compact ultraportable that's a far cry from the image of an archetypal gaming machine.

Draped in stylish matte black, the Razer's anodised aluminium chassis comes within touching distance of capturing the high-end feel of the Dell XPS 15 and MacBook Pro 13. This is exemplified by a narrow 4.9mm bezel encasing the 13.3in display, widening only above the display to incorporate a webcam.

The key to its aesthetic lies in subtlety. For example, Razer's tri-serpent logo is etched on the lid in a tone-on-tone black rather than its usual garish green, while the power button is covertly placed on the keyboard. But a few details do betray its gaming roots. A fully-customisable backlit keyboard gradually shifts in tone every few seconds across a palette of 16.8 million colours, and its USB ports are subtly lined with lime green. 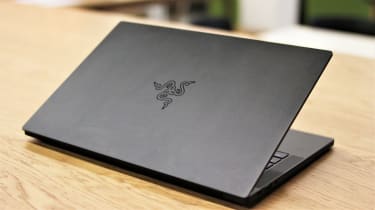 While the device looks stylish, the build quality is perplexingly inconsistent, with its sturdy chassis contrasting with unforgivably wobbly ports; a definite black mark. There was plenty of wiggle room with all four ports in our review model, with even a faint touch to the left-hand USB-C socket disrupting the connection with both an external monitor and its charging unit. The right-side USB-C port fared better, while both USB A ports jiggled but not to any disruptive extent. In fairness, this could be an issue with our specific device, which has been put through the wringer in its role as a demo unit.

A thickness of 14.8mm is average, matching the MacBook Pro's 14.9mm frame, which can also be said for the machine's 1.31kg weight, which slightly undercuts Apple's flagship device. These measurements are also fairly consistent with the HP Elitebook X360, which is 14.9mm thick and 1.28kg heavy.

Meanwhile, a high 432.7cd/m2 maximum brightness and an impressive 1305:1 contrast ratio allows the screen truly pop from its thinly-bezelled frame. 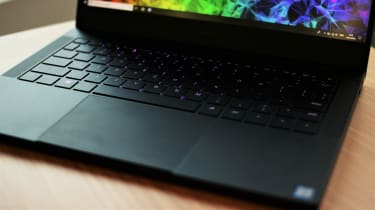 The device features a new iteration of the Razer Chroma keyboard (as it's stylised), underpinned by impressive fully-customisable LED backlighting that can cycle through 16.8 million colours.

This feature can either be seen as a needless distraction, or a fun gimmick, depending on your perspective. Rest assured it can just as easily be switched off via the inbuilt Razer Synapse app, as it can be configured to rapidly cycle through a plethora of tones in dizzying fashion. Each key can also be assigned to an individual colour, if you so choose.

The chiclet-style keys themselves are well-sized, and touch typing at speed returns a satisfying sense of feedback despite a shallow depth. But the short distance between each key can render an otherwise satisfying experience a little awkward. This, coupled with a somewhat crammed layout, is disappointing. It's really easy, for example, to accidentally tap 'hash' when reaching for 'enter', or knock the 'up' key when stretching for 'right-shift'.

The power button rather stealthily features where the delete key normally would, while insert is wrapped up into the delete key, sat beside the power button, as an 'fn' function; also true for a handful of other functions. Thankfully, the power key isn't configured to switch the machine off, or put it to sleep, when inevitably hit by accident.

The glass-coated touchpad, on the other hand, is flawless. Its wide-spanning surface is smooth, and a pleasure to navigate, while both left and right-clicks are simple and as satisfying to push as one could ask for.

Power is where the Razer Blade Stealth truly excels. Packed with a quad-core Intel Core i7-8565U processor in all configurations, it runs at a base clock speed of 1.8GHz, with a 4.6Ghz turbo.

It also features a maximum of up to 16GB of LPDDR3 RAM, (with 8GB minimum), although this is fixed in each configuration and cannot be upgraded. The graphics chip, meanwhile, is an NVIDIA GeForce MX150 with 4GB dedicated memory, and an Intel UHD 620 chip fitted into the base model. 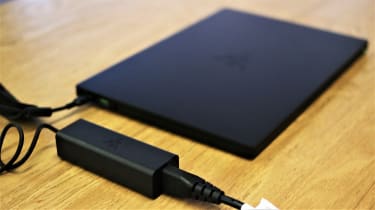 Together these components produced a blistering set of results when put through our tests, impressive running both single-threaded and multi-threaded processes. An overall score of 115 smashed the HP EliteBook 840 G5's 77, and edged the 14in Asus Zenbook Flip S' score of 111. The Blade Stealth even beat the latest XPS 13's excellent 96, with the 13in MacBook Pro the only comparable device surpassing its score with 150. It's also a significant upgrade on the 2017 Intel Core i7-7550U-fitted Blade Stealth, which scored just 55.

For all the merits of high performance, however, it's somewhat tainted by the machine's poor 54Whr battery, which lasted just 4hrs 38mins in our video testing. While it puts another dampener on the device's otherwise strong credentials as a business-friendly unit, the power brick is at least welcomingly compact and portable for a machine as power-guzzling as this.

For a device with high potential, this battery life is incredibly disappointing when compared against, for instance, the XPS 13's 10hrs 7mins lifespan, and the MacBook Pro 13's 8hrs 25mins. The Surface Laptop 2 even lasted a forgivable 7hrs 7mins in our test. We should also note that batteries within 4K devices typically consume more power than their 1080p counterparts, which doesn't bode well for users looking to grab the fully-specced Razer.

Featured in the Blade Stealth's chassis are two USB 3.1 ports, a Thunderbolt 3 USB-C power port, a USB-C 3.1 port, and a 3.5mm audio jack. It's not a vast collection but should be enough to satisfy most office-related needs.

We'd also have wanted to see the manufacturer capitalise on the device's vibrant display by including an SD memory card reader, which would make it even more suited to media editing. However, professionals who depend on this can still transfer their data using any number of adapters and dongles. 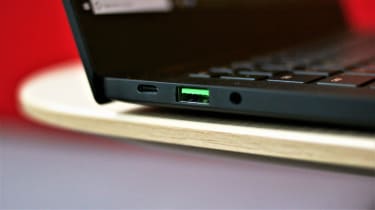 The ports which are included, as mentioned previously, felt shoddily-built and were frustrating to use. The connection with an external monitor via the left-sided Thunderbolt 3 USB-C port was frequently disrupted by faint touches to the cable's head and neck, which is also true for the right-sided USB-C port - albeit to a lesser extent.

In terms of security, the device offers facial recognition authentication via Windows Hello, indicated by a sharp flashing red light sat beside the webcam, alerting you to when you're being scanned. This works fine ordinarily but will need some additional calibration via the Windows Settings for bespectacled users who often use their PC without their glasses.

The late-2018 Razer Blade Stealth is unique in its capacity to simultaneously exude a sense of both brilliance and overwhelming disappointment.

That it showcases an effective marriage of style and substance is worthy of recognition; its gorgeously simplistic design is equally matched with powerful hardware. Yet a handful of small but serious issues undo much of this good work.

The battery's abysmal lifespan is chief among our concerns. Just half a working day means the Razer is out of the question for anybody hoping to take it out of the office, for instance, where a power supply may not always be guaranteed. Moreover, while keyboard bugbears are issues you can adjust to, wiggly and occasionally-disruptive ports are a relative red flag.

Despite these issues, however, there's mountains of promise in this 13in ultraportable. Whether by accident or by design, its manufacturers have built a machine with the potential to be an industry leader. Razer needn't go back to the drawing board. Rather, with just a few tweaks this gaming machine can give the likes of Apple and Dell something to truly worry about.

Gorgeously designed and packed full of power, the Razer Blade Stealth has the makings of an elite device that can compete with the likes of the MacBook Pro. This 13.3in ultraportable is, however, let down by a handful of problems that blacken its otherwise strong credentials