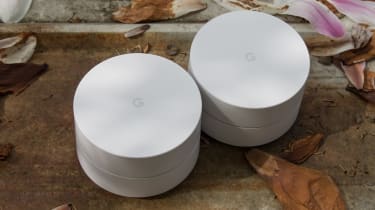 In addition to some smart behind-the-scenes stuff, Google has also thrown in a couple of impressive network monitoring features, too. There's real-time and historical lists of how many devices are connected (including exactly how much bandwidth they're using), as well as records of network usage, speed and more.

In addition to this, users have the ability to prioritise certain devices, meaning that they will always have the fastest and most reliable Wi-Fi connection. This is ideal for any business-critical appliances, like backups or servers, or for making sure that certain teams take precedence.

There's also family controls, allowing parents to block individual devices or groups of devices according to a pre-set schedule (mealtimes, for example), or to pause internet access altogether. Guest network settings are available too, which allow you to provide access to your Wi-Fi network and connected devices like Chromecasts and the like without also giving them access to shared folders and other private information.

Google has even thrown in a set of testing utilities, allowing you to check the internet speed from your ISP, the strength of the mesh connection between your nodes and the Wi-Fi signal to your mobile device.

The real test of a wireless router, however, is its performance. It can have all the fancy features in the world, but if it doesn't have a good coverage and throughput rate, it might as well be a paperweight. Thankfully, Google Wi-Fi handles both of these things with impressive aplomb. 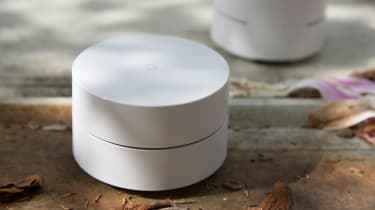 The whole point of a mesh Wi-Fi network is to minimise the coverage issues that can crop up in large or thick-walled properties, so it's no surprise that Google WiFi performs well here. By placing nodes throughout the house, you can ensure that there's no weak signal areas or 'black spots' throughout the premises.

We found that two nodes were sufficient to provide a large, five-bedroom house with sufficient coverage, but you may want to add more for larger offices. The good thing is that there's no limit to the amount of nodes you can add to the network, and each downstream node only needs to be in range of the one before it in order to maintain a connection.

Google WiFi's performance was similarly capable in terms of raw speed. At close range, it racked up download speeds of 73MB/sec, with 27MB/sec speeds in our long-range tests. While that's highly credible, outperforming the more expensive Linksys Velop, it's not quite as fast as BT's Whole Home Wi-Fi system, which managed to hit 89MB/sec at close range and 36MB/sec at a distance.

Google WiFi is one of the best mesh Wi-Fi products around. It's small, stylish and setup couldn't be easier. Not only that, but it's also got a host of network monitoring and management tools to ensure that your connection stays in tip-top shape.

Performance and coverage are excellent too, and while Google WiFi isn't quite the fastest mesh Wi-Fi product on the market, it's more than capable of keeping up with most home or small business use cases. 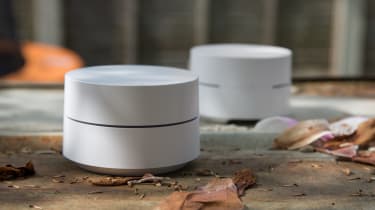 In fact, despite being primarily marketed as a consumer device, Google WiFi might just be one of the best small-business networking solutions we've seen in a while. The easy setup and maintenance ensures that even non-technical business owners should have no trouble using it, and the ability to add more nodes means that your network can scale with your business, without having to rely on boosters or range extenders.

Google WiFi is an excellent piece of kit, and if you're thinking about upgrading your wireless network, it's definitely going to make you happy.

Google WiFi is the best mesh Wi-Fi network you can buy. It's not quite as fast as some others, but the excellent management and setup experience elevates it to the top spot.